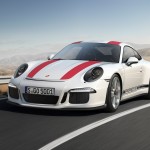 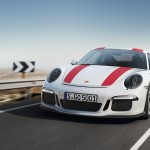 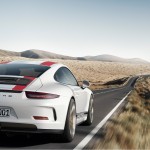 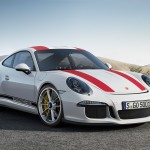 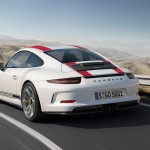 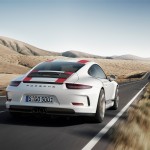 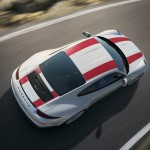 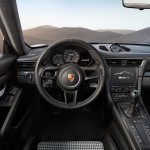 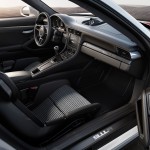 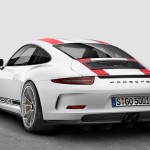 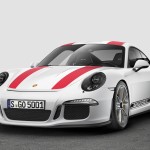 Atlanta, Georgia. Celebrating its world debut at the 2016 Geneva International Motor Show, the new 2016 Porsche 911 R follows the tradition set by the first road-homologated race car bearing the name in 1967. Produced as part of a limited production series, the original 911 R (R for Racing) was entered in rallies, in the Targa Florio and in world record runs. Like its legendary predecessor, the new 911 R features a systematic lightweight construction, a high level of performance and an unfiltered driving experience. The 911 R is limited to 991 units worldwide, and represents the lightest available version of the 911 with a curb weight of just 3021 pounds. Powered by a 500 hp four-liter naturally aspirated flat-six engine which is mated to a six-speed manual transmission, the 911 R underscores Porsche’s commitment to building emotional and engaging high-performance sports cars with a maximum amount of driving pleasure. Developed by Porsche’s motorsport department, the 911 R is the third model to use Porsche’s latest generation of high-performance naturally aspirated flat-six engines alongside the track-bred 911 GT3 and 911 GT3 RS models.

Powering the 911 R is the four-liter flat-six familiar from the 911 GT3 RS. The race-bred powertrain delivers 500 hp at 8,250 rpm and generates 338 lb.-ft. of torque at 6,250 rpm. The 911 R can accelerate from 0 to 60 miles per hour in 3.7 seconds and reach a top track speed of 200 miles per hour. True to its purist character, the lightweight model is available exclusively with a six-speed manual transmission featuring short, performance oriented gear ratios. The quick and crisp shifting further underscores the high level of driving engagement.

Porsche Stability Management (PSM) has been specifically calibrated for the 911 R by Porsche’s motorsport department. A rev-match function, which can be activated at the touch of a button, is a standard feature, while a single-mass flywheel is available as an option, sharpening the responsiveness of the engine even further. A front-axle lift system can also be optionally equipped to maximize everyday practicality: it can increase the ground clearance of the front axle by approximately 1.2 inches at the touch of a button.

Weighing just 3021 pounds, the 911 R is 110 pounds lighter than the 911 GT3 RS. The front luggage compartment lid and the front fenders are made of carbon fiber, while the roof is made of magnesium, lowering the vehicle’s center of gravity. Reduced interior insulation and the omission of rear seats also help to reduce weight. The 911 R comes standard without an air conditioning or audio system. They can be ordered at no extra charge.

More than meets the eye: classic 911 look with GT racing technology
The 911 R retains a sleek, classic look. At first glance, the body resembles that of the 911 Carrera. Only the front fascia and rear body familiar from the 911 GT3 hint at the birthplace of the 911 R: Porsche’s motorsport department in Flacht. Under the skin, the 911 R has much to show: the engine comes from the 911 GT3 RS. All the lightweight components of the body and the complete chassis have been adopted from the 911 GT3. Road use being the priority, the 911 R does without the fixed rear wing characteristic of the 911 GT3 and 911 GT3 RS models. Instead, an automatically deployed rear spoiler, familiar from the 911 Carrera models, and a rear underbody diffuser specific to the 911 R provide the necessary downforce. Front and rear fascia components are taken from the 911 GT3. The Sport Exhaust System is made of lightweight titanium, as is the case for the 911 GT3 RS. A redesigned spoiler lip is installed at the front. Optional Porsche logos on the side of the vehicle and color stripes in red or green running over the center of the car display the connection to its legendary predecessor.

The 911 R is equipped with full bucket seats with carbon fiber backrests and seat centers upholstered in houndstooth design, paying homage to the original 911 of the 1960s. A “911 R-specific” GT Sport steering wheel measuring 14.1 inches in diameter awaits the driver’s commands. Gearshifts can be carried out via a shortened, R-specific gear lever. Carbon fiber interior trim strips with an embedded aluminum badge on the passenger side indicate the limited production number of the 911 R. A feature typical of GT vehicles, the conventional handles are replaced with door opening loops.

Vehicle launch and prices The 2016 Porsche 911 R can be ordered now. In the United States, it will be reach dealers late this summer. The starting MSRP is $184,900, excluding the $1,050 destination charge.

About Porsche Cars North America Inc. | One Porsche Drive, Atlanta, GA 30354 USA
Established in 1984, Porsche Cars North America, Inc. (PCNA) is the exclusive U.S. importer of Porsche 918 Spyder, 911, Boxster and Cayman sports cars, the Macan and Cayenne SUVs, and Panamera sports sedans. Headquartered in Atlanta, Georgia since 1998, PCNA is also home to the first Porsche Experience Center in North America featuring a module-based 1.6 mile driver development track, business center, human performance center, and fine dining restaurant. PCNA employs approximately 300 people who provide parts, service, marketing, and training for 186 dealers. They, in turn, work to provide Porsche customers with a best-in-class experience that is in keeping with the brand’s 65-plus year history and leadership in the advancement of vehicle performance, safety and efficiency. PCNA is a wholly-owned subsidiary of Porsche AG, which is headquartered in Stuttgart, Germany.

At the core of this success is Porsche’s proud racing heritage that boasts some 30,000-plus motorsport wins to date.

Note: Photos and video footage are available to accredited journalists on the Porsche Press Database athttp://press.porsche.com/