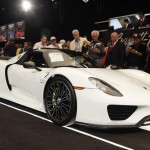 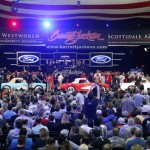 SCOTTSDALE, Ariz. – Feb. 1, 2016 – Barrett-Jackson, The World’s Greatest Collector Car Auctions®, kicked off its 45th anniversary year with their biggest event of 2016, achieving record car sales and charity auctions, as well as delivering star-studded entertainment from Jan. 23-31, 2016, at WestWorld of Scottsdale. During the automotive lifestyle event, 1,469 vehicles sold for over $102 million (unaudited) at a 99% sell-through rate and over 1,400 pieces of automobilia sold for nearly $3 million (unaudited) bringing the total sales to over $105 million. Approximately 350,000 people attended the 45th Anniversary Auction, including many of today’s most recognizable celebrities.

“Our 45th Anniversary Scottsdale Auction was an incredible success at every level,” said Craig Jackson, chairman and CEO of Barrett-Jackson. “Because our events are far more than just a parade of vehicles across the block, we continue to attract the most people, the best cars and create the greatest automotive lifestyle experience in the world. From an unbelievable acoustic performance by Zac Brown Band at our Opening Night Gala to record-setting auction results over the nine-day event, Barrett-Jackson Scottsdale is the centerpiece for a high-octane lifestyle.”

The Barrett-Jackson Scottsdale auction gave bidders the chance to select from a wide range of American muscle, European classics, exotic sports cars and one-of-a-kind customs. The top cars sold in Scottsdale include:

“Barrett-Jackson Scottsdale continues to be the barometer for car collecting,” said Steve Davis, president of Barrett-Jackson. “It’s clear that this hobby is fueled by cars that people can connect with, which is why we created such a diverse docket. From the hottest exotics like the Porsche 918 to the coolest American muscle and hot rods, we had something for every taste.”

Once again, charitable giving was a significant part of the auction action as 11 vehicles crossed the Scottsdale block, including the 2017 Acura NSX VIN #001. They cumulatively raised $3,406,000 to benefit local and national non-profit organizations. The charity cars auctioned at No Reserve were:

Barrett-Jackson has raised over $88 million for local and national charities to date.

About The Barrett-Jackson Auction Company
Established in 1971 and headquartered in Scottsdale, Arizona, Barrett-Jackson, The World’s Greatest Collector Car Auctions®, is the leader in collector car auctions and automotive lifestyle events. The company produces auctions in Scottsdale, Arizona; Palm Beach, Florida; at Mohegan Sun in Connecticut, and Las Vegas, Nevada. With broadcast partners, Velocity and Discovery Channel, Barrett-Jackson will feature live television coverage in 2016, including broadcasts in over 100 countries internationally. Barrett-Jackson also endorses a one-of-a-kind collector car insurance for collector vehicles and other valued belongings. For more information about Barrett-Jackson, visit http://www.barrett-jackson.com, or call (480) 421-6694.