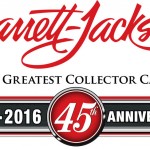 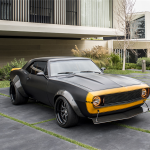 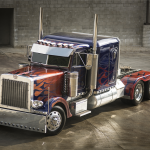 SCOTTSDALE, Ariz. – Jan. 4, 2016 – Barrett-Jackson, The World’s Greatest Collector Car Auctions®, announced today that Paramount Pictures and American filmmaker Michael Bay will auction two vehicles that starred in the Transformers movie franchise, during the company’s nine-day 45th Anniversary Auction, from Jan. 23-31, 2016, at WestWorld of Scottsdale. Up for sale at No Reserve is the iconic truck, Optimus Prime (Lot #1325.1), featured in the first three science fiction action films. Bay has consigned a 1967 Chevrolet Camaro SS (Lot #1325.2), which was cast as Bumblebee in the latest film, “Transformers 4: Age of Extinction.”

“The hottest Hollywood stars at Barrett-Jackson come in all shapes and sizes,” said Craig Jackson, chairman and CEO of Barrett-Jackson. “We’re excited that Paramount Pictures and Michael Bay have chosen us to sell Optimus Prime and Bumblebee, two of the leading heroes from the Transformers movie franchise. Our Scottsdale auction is always electric and will serve as the ideal venue for these two celebrities seeking new homes.”

Like the movie character that it represents, Optimus Prime (Lot #1325.1) is big. An entire team of artists and illustrators worked tirelessly, drawing potential trucks and cars, trying to zero in on just the right look for each robot/vehicle. When the film’s production designer showed Michael Bay a photo of the enormous tractor trailer, the director was immediately taken by the lines and size of the truck. Specs include a custom bumper, “headache rack,” dark tinted windows, ominous, glowing blue lights and the trucks two most important and well known features:  the blue and red flamed paint job and “Autobots®” badge mounted prominently to the grille shell. Optimus Prime is a fully functioning vehicle with a real VIN and a title in Paramount Pictures’ name.

“I’m confident that Optimus Prime and Bumblebee will be a huge hit in Scottsdale,” said Steve Davis, president of Barrett-Jackson. “These vehicles are part of a celebrated global phenomenon and have cemented their place in the hearts of fans who watched them in action on the big screen. The two heroes will be an exciting part of any collection for movie fans and car enthusiasts alike.”

Bumblebee is a1967 Chevrolet Camaro SS (Lot #1325.2) that was featured in the latest Transformers movie, “Age of Extinction.”Owned by American filmmaker Michael Bay, this Resto-Mod features custom suspension, an LS3 Corvette engine with overdrive transmission, and Wilwood brakes with added stunt caliper. The exterior is finished in satin black paint with high-gloss yellow accents and custom carbon-fiber fender flares and air dam. The car was also included in a March 2015 Architectural Digest feature of Bay’s cinematic Los Angeles home.

For more information on becoming a bidder, follow the link to www.barrett-jackson.com/bid.  Enjoy the 45th Anniversary Scottsdale Auction in style with a Barrett-Jackson VIP Experience Package. Information on available packages and how to be a part of this world-class event is available here.

About The Barrett-Jackson Auction Company
Established in 1971 and headquartered in Scottsdale, Arizona, Barrett-Jackson, The World’s Greatest Collector Car Auctions®, is the leader in collector car auctions and automotive lifestyle events. The company produces auctions in Scottsdale, Arizona; Palm Beach, Florida; at Mohegan Sun in Connecticut, and Las Vegas, Nevada. With broadcast partners, Velocity and Discovery Channel, Barrett-Jackson will feature live television coverage in 2016, including broadcasts in over 100 countries internationally.Barrett-Jackson also endorses a one-of-a-kind collector car insurance for collector vehicles and other valued belongings. For more information about Barrett-Jackson, visithttp://www.barrett-jackson.com, or call 480-421-6694.