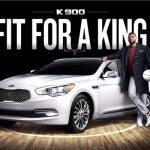 After we reported that Lebron was pushing a K900 and flexin’ it on Instagram over a month ago, the deal between Lebron and Kia seemed inevitable. Yet, the most interesting part of the story is how the partnership came about, with Lebron actually reaching out to Kia. Read the full story via ESPN below:

The latest endorsement deal for one of the most marketable athletes in the world might surprise a few people: LeBron James is endorsing Kia. The Cleveland Cavaliers star signed a deal with the car brand to be the ambassador of its new luxury sedan, the K900. “They’re also the title sponsor of the NBA and they did a lot of great promoting as far as the game,” James said before Cleveland played the Indiana Pacers in Cincinnati on Wednesday. “And me being one of the top guys in our league, to try to promote the game, I thought it was fitting.” James previously donated Kia cars he won as a result of winning the league’s MVP award to charity, but this past summer, his business partner Maverick Carter said James — a car enthusiast — asked whether he could get the new $66,000 car to drive around. Kia, which is entering its eighth year as the official vehicle of the NBA, happily obliged. “It was a great call to get,” Tim Chaney, vice president of marketing at Kia Motors America, told ESPN.com. “We were not actively seeking another endorser, but LeBron told us, after driving the car around this summer, that he liked it so much, that we decided to partner with him. He brought us instant credibility.” Terms of the multiyear, multimillion-dollar deal were not disclosed, but the company will use James in television ads that have already been shot.

“Everything that I do, I want it to be authentic to what I do,” James said. “And what they’re about, they’re a pretty cool brand to be with. I’m just excited I’m able to be with them.” James tipped his hand when, in August, he posted pictures of the car on an Instagram post. “Rolling around in my K900,” James wrote. “Love this car!!” A source says the deal requires James to show up at Cavaliers games in the car. It’s much like Tiger Woods’ old Buick deal, which required the golfer to show up at events in the car brand. The deal does not, however, require James to drive only the K900. He has a car collection with more than 20 cars that has included a Lamborghini, Porsche, Ferrari, Maybach and Rolls-Royce.  “This deal isn’t a risk for us,” Carter said. “He loves his cars, he owns the K900 and he’s a big fan.” Carter said James used his influence to get one of his other sponsors to use the K900 in a commercial. James and “Mr. Monopoly” roll into Cleveland while sitting in the backseat of the car in a McDonald’s spot. Kia did some due diligence before signing James. Data the company got back suggested James was in the top 1 percent of celebrity influencers in the older car-buying demographic (40-plus), which this car appeals to, Chaney said. The pressure to sell Kia’s highest-end product in its nine-car arsenal won’t immediately be felt by James. Realistically selling a car for $20,000 more than your next-highest-priced vehicle is a hard job and will take time. From January to September of this year, Kia had sold only 1,106 K900s in the U.S. compared to more than 122,000 of the Optima, the South Korean brand’s most popular car, which it happens to promote heavily through its deal with the NBA. As of now, the K900 currently represents 0.2 percent of brand sales in the U.S. “This is not about just selling a few luxury sedans,” Chaney said. “We are looking to LeBron to help boost our brand profile.”

The 420-horsepower car has a V8 engine and comes with leather, wood trim and backseats that are heated and recline. Kia has grown exponentially in its 20 years in the U.S. and says it is on pace to have its third year in a row of selling more than 500,000 cars in the country. It was just named the 73rd-most powerful brand in the world by Interbrand, ahead of the likes of Starbucks, Johnson & Johnson and MasterCard. Although James has never had a car deal, he was connected earlier in his career to one particular brand after his mother bought him a $50,000 Hummer H2 as a gift during his senior year in high school. Kia is also endorsed by Los Angeles Clippers forward Blake Griffin, LPGA golfer Michelle Wie and tennis player Rafael Nadal. The brand also sponsors the FIFA World Cup and the Australian Open. James’ current endorsement deals include Nike, Coca-Cola (Powerade), Beats By Dre, McDonald’s, Samsung, Audemars Piguet and Dunkin Donuts in Asia.