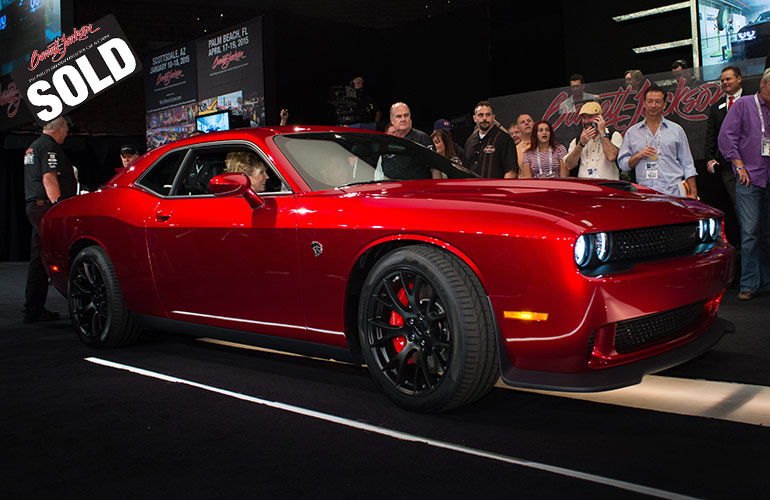 LAS VEGAS, Nev. – Sept. 28, 2014 – Barrett-Jackson, “The World’s Greatest Collector Car Auctions TM” once again rocked Las Vegas with another record-setting auction at the Mandalay Bay Event Center from Sept. 25-26, 2014. During the three-day event, Barrett-Jackson hosted the largest number of consigned vehicles in the auction’s Las Vegas history with more than 700 vehicles and more than 339 collectible automobilia pieces crossing the block for more than $33,300,000 in sales (unaudited).

“Our Las Vegas auction continues to grow in popularity as a world-class destination experience, offering a truly electric atmosphere only found in the Entertainment Capital of the World,” said Craig Jackson, chairman and CEO of Barrett-Jackson. “With the largest docket in our Las Vegas auction’s history, the collection of vehicles crossing the block was truly amazing. From a 2013 Aventador Lamborghini to a ’28 Model A Ford and the first Dodge Hellcat, there was something for everyone on this year’s docket. And virtually all of our vehicles were sold at No Reserve, indicating the true market value of the collector car hobby.”

The top 10 cars sold in Las Vegas include (price with commission):

Five cars crossed the Las Vegas auction to raise $1,642,500 to benefit local and national charities. On Saturday, Dodge executives including CEO Tim Kuniskis took center stage to showcase the 2015 Dodge Challenger SRT Hellcat (Lot #3004) benefitting the Opportunity Village of Las Vegas. The fastest production muscle car hammered in at $825,000, which will be equally matched by long-time Barrett-Jackson friend, the Engelstad Family Foundation. With their generous donation, the Hellcat raised more money for charity than any other car in Barrett-Jackson history.

“Barrett Jackson is very proud of our charitable efforts,” said Steve Davis, president of Barrett-Jackson. “It was an historic moment on our auction block to see a car from General Motors, Ford, and Dodge sell for charity. I am proud that Barrett-Jackson has created a platform to help so many wonderful charitable organizations across the country through the generous support of the collector car community.”

The 2014 Barrett-Jackson Las Vegas auction also ends the company’s 18 year relationship with the FOX family of networks and National Geographic. Debuting at the 2015 Scottsdale auction, Barrett-Jackson will begin an exciting new relationship with Velocity and Discovery Channel. Throughout the year, Velocity and Discovery Channel will broadcast more than 100 hours of coverage in Scottsdale, West Palm Beach, Reno and Las Vegas.  The full schedule is located at barrett-jackson.com; fans can contact their local cable or satellite provider to ensure access to programming.

“FOX has been a wonderful partner for Barrett-Jackson over the years,” said Jackson. “They’ve helped us bring the thrill of the Barrett-Jackson experience to their audiences. Our new partnership with Velocity will return Barrett-Jackson to a dedicated auto enthusiast network. With expanded distribution to Discovery Network’s more than 1.6 billion global subscribers, we’ll have the largest audience for a collector car auction in history.”

Over the last seven years, the Las Vegas auction has evolved into one of the top auctions in the country. As the end of the official auction season, Barrett-Jackson will prepare for the Scottsdale event on Jan. 10-18, 2015.