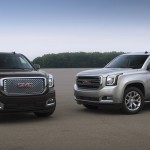 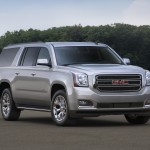 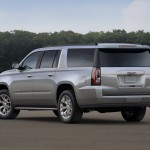 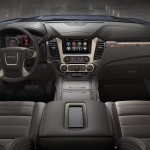 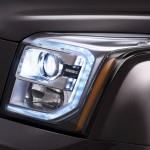 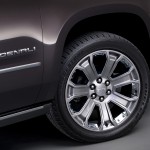 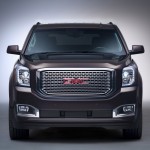 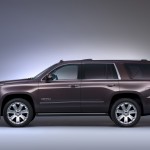 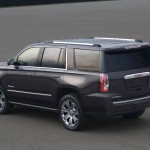 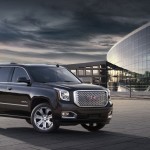 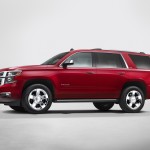 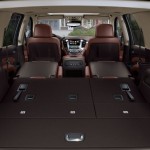 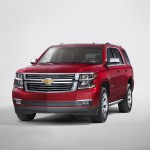 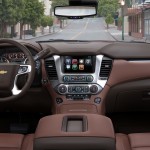 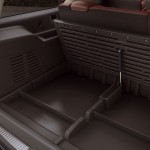 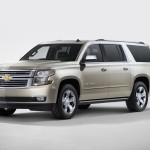 2015 Chevrolet Suburban side view from the New York reveal showcases an all new design. 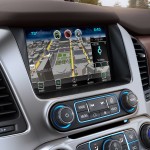 2015 Chevrolet Suburban features a wide range of functional technologies including Navigation and MyLink. 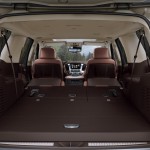 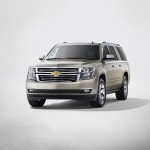 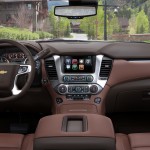 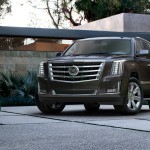 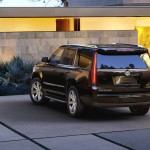 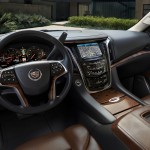 CUE, Cadillac’s advanced system for connectivity and control, is standard on the Escalade, featuring state-of-the-art voice recognition with touch controls common with the world’s most popular tablets and mobile devices. A standard 12.3-inch digital gauge cluster can be reconfigured with four themes and an available head-up display projects information onto the windshield. 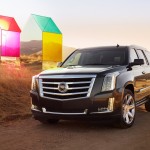 An art installation and portrait series inspired by the 2015 Cadillac Escalade, created by Autumn de Wilde. 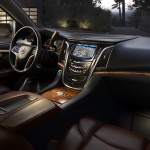 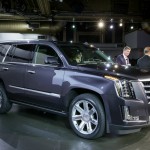 Story by Will Sabel Courtney
Photos by GMC / Chevrolet / Cadillac

The last 10 years haven’t been too kind to big, body-on-frame SUVs. Gas prices have tripled and the economy has tanked, making the idea of filling up a truck-based, V8-powered behemoth rather wallet shaking. Car-based crossovers have grown in size and room, while crew-cab pickups have grown in comfort and refinement, chipping away at the market from both sides. As a result, most car companies have let their giant-size SUV development fall by the wayside. But General Motors has kept the full-size, body-on-frame faith—and for the 2015 model year, they’ve rolled out their best big SUVs yet.

2015 GMC Yukon/Yukon XL/Yukon Denali
Those two little letters “X” and “L” may not seem like they make much difference, but they signify 14 inches more wheelbase and 20 inches more length between the Yukon and the extra-large Yukon. Like the Suburban and Tahoe, they come with a Titanic-load of passive and active safety features, both standard and optional: radar-based cruise control and collision alert, lane departure warning, automatic braking, a seat that vibrates to alert you to potential threats, and a front-seat center-mounted airbag. The luxurious Denali trim adds noise-cancellation technology, a standard 6.2-liter V8, magnetic ride control suspension and, arguably, one of the best-looking front ends on a rig today.

2015 Chevrolet Tahoe/Suburban
Believe it or not, this 2015 model marks the 12th generation of the Suburban—and the 80th anniversary of the nameplate. That’s right, the Chevy Suburban is older than Morgan Freeman. But just like that badass M.F., the Suburban—and its shorter Tahoe brother—is doing better than ever. Like all of GM’s new full-size SUVs, the Chevy twins come with all-new styling that offers a fresh look and decreased wind resistance, which helps reduce noise and saves gas. But the Tahoe and Suburban ain’t just about looks; they’re built on a stronger frame and have a wider rear track than the old models, for better stance and better hauling, and they come with a standard 5.3-liter V8, using direct injection and cylinder deactivation to optimize power and efficiency. These Chevys can be equipped with plenty of tech cred, too; an 8-inch color touchscreen in the dash is an option, and these trucks can come with up to six USB jacks and six power outlets. Oh, and while 18-inch wheels are stock, 20s and 22s alike are factory options.

2015 Cadillac Escalade
The mack daddy of GM’s full-size SUVs and Cadillac’s flagship model, the Escalade rolls into its fourth generation better than ever. Power is up to 420 horses and 460 lb.-ft., generated by GM’s latest 6.2-liter V8. Cadillac’s Iron Man–worthy CUE touchscreen technology comes standard inside, along with a 12.3-inch digital instrument panel. The guts have been upgraded to true “Standard of the World” levels, with warm wood, elegant leather and smooth suede coating almost every artfully designed and carefully crafted surface. And thanks to edgy, bold styling that stays true to its Cadillac roots, there’s no mistaking this luxury hulk for anything other than an Escalade—which is just how we’d want it.