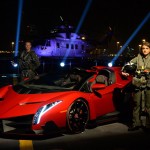 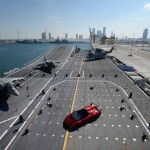 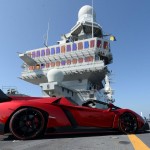 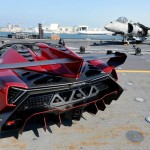 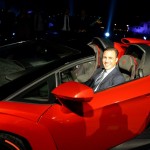 Keeping a car on  a yacht? That’s baller. Keeping a $4.5 million Lamborghini on a 31,000 ton aircraft carrier? That’s a whole new level of badass. But that’s exactly what Lamborghini did to show off the new Veneno Roadster to some of the Middle East’s richest and most important people.

The Italian aircraft carrier Cavour, currently touring the Middle East on a trade mission to show off Italian-made goods, stopped in Abu Dhabi in the U.A.E. for a special VIP event on Sunday, where the Lamborghini Veneno Roadster was shown off on the aircraft carrier’s deck. (Lamborghini was picked for the trade mission in part because of the brand’s extreme popularity in the region, so it’s not surprising that they’d pay back the love with a cool event such as this.) Since only nine of the 740 horsepower Aventador-based super-verts will be made, odds that a Veneno will ever wind up on an aircraft carrier again are pretty slim, so be sure to check out these awesome pictures now!

[Shout-out to Autocar and 7 Days In Dubai!]