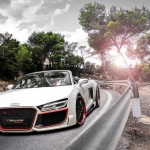 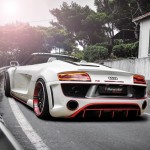 Arguably the greatest looking car on the market (and when I say arguably, I’ll argue anyone who says otherwise) has just gotten a bit sweeter. Regula Tuning out of Germany has released a bodykit for the 518hp, 391 lb.-ft. Audi that replaces the front and rear bumpers and side skirts with new carbon fiber ones. Additionally, anyone fortunate enough to own an R8 Spyder will have the option of upgrading the wheels to 20-inch Oxigin-Oxrocks. The kit will set you back just over ten grand, but that’s nothing to tack onto the Spyder’s $128,400 starting price.