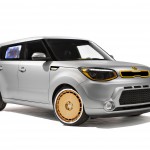 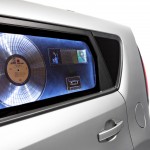 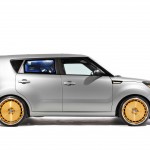 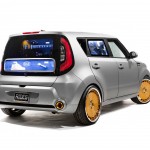 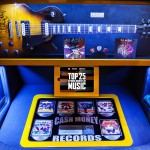 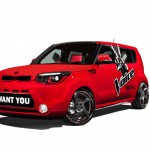 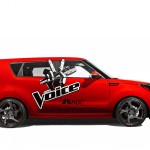 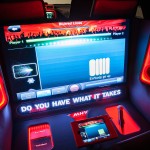 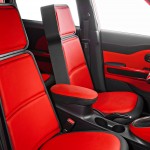 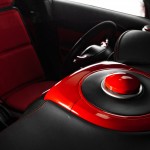 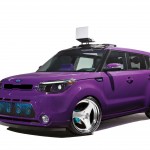 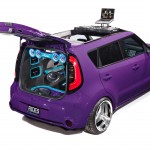 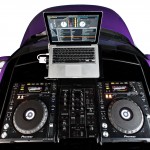 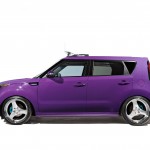 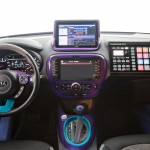 By now, you know that RIDES always comes out to SEMA in force. Well, for 2013, we partnered with Kia and some of the biggest names in music to bring three custom Kia Souls to take the show by storm—and we’re excited to be able to share them with you first.

The DJ Booth Kia Soul is designed to bring the beat to the streets, customized to be a rolling DJ booth that can bring the party anywhere there are roads. The roof’s been removed to allow the DJ to rise above it all on a diamond-plated stage that replaced the back seats, but the BASF purple (with turquoise accents) paint will catch just as many looks as the trick platform. 19-inch Rotiform BRU wheels and Continental tires, along with ARK performance lowering springs, give it presence—and in a pinch, a speaker in the front grille can pump out the jams the DJ’s laying down.

The Voice Kia Soul is, as you’d probably guessed by now, inspired by the hit NBC singing competition TV show The Voice. Cee-Lo, Adam Levine, Christina Aguilera and Blake Shelton may argue every week about which of the contestants is best, but there’s no disputing this Kia has what it takes. The Voice logo stands out on either side of the car, along with 20-inch color-matched Niche Scope wheels and Falken tires. Inside, the four judges’ chairs have been recreated as the car’s seats; a big red button on the dash controls the “I Want You” logo, just like on the show. And an iPad Mini connected to a 40-inch LED TV and Rockford Fosgate speakers lets you practice for your dream audition (or just belt your heart out) using the preloaded The Voice app.

RIDES and Kia’s third and final car is one dedicated to the history of modern popular music—the Music Memorabilia Kia Soul. Teaming up with our partner magazines electro and XXL, we created a rolling music museum that celebrates the long, rich past of rock n’ roll, hip-hop, and EDM. There’s a guitar signed by Slash, a mike signed by John Legend, a G-Unit sneaker signed by 50 Cent, and a Jimi Hendrix gold record, all  encased in Plexiglas in the trunk for safekeeping. Outside, the platinum-and-gold paint scheme was inspired by the music industry’s standards for sales success; the platinum PPG waterborne paint sets off nicely against the gold 20-inch HRE 935s and Nitto Invo tires. Ark Performance springs help give it that perfect stance, and the interior gets gold stitching to set off the black leather and suede.

We’re excited to bring these three cars to the show this year, so we hope you dig ’em!

RIDES magazine converted this 2014 Kia Soul into the ultimate DJ booth on wheels. The roof was removed to give the DJ the ability to rise up and stand on a custom diamond-plated stage, which replaced the rear seats, and start spinning on the Pioneer CDJs [CS1] and mixer. Influenced by both EDM and hip-hop, this Soul was painted an eye-catching BASF purple with turquoise accents. The Soul was outfitted with 19-inch Rotiform BRU wheels and Continental tires, and lowered with Ark Performance springs to give it an aggressive stance. With LED lighting, front and rear strobes, and a speaker enclosure built into the lower grille, it promises even the most seasoned dancers a once-in-a-lifetime experience.

For the headlining DJ, black leather, graphite suede and turquoise stitching give the Soul’s interior a vibe reminiscent of a lounge area. With the Maschine Mikro production studio molded into the passenger dash, every control is available at their disposal at any time. Blasting the beats is a Pioneer audio system that includes five amplifiers, three component speakers, two 10-inch and two 12-inch Champion Series subwoofers, and a sound bar housing four coaxial speakers, making sure the most important part of any DJ set—the music—is heard loud and clear.

This one-of-a-kind Kia Soul encompasses the passion, the emotion and the raw talent of music as an industry. Creating a music museum on wheels, XXL, elektro and RIDES magazines curated music memorabilia spanning rock, hip-hop and EDM history. Some of the exclusive tokens of music history include a signed Slash guitar, a G-Unit sneaker signed by 50 Cent, a Jimi Hendrix gold album and a signed John Legend microphone, which are displayed in hand-built Plexiglas enclosures in the trunk, rear windows and rear hatch insert.

As a nod to industry success, this Soul was influenced by platinum and gold records: The Soul’s exterior received PPG waterborne platinum silver, gold exhaust tips and anodized 20-inch gold HRE 935s. The interior received gold diamond stitching and painted trim that highlights the reupholstered black suede and leather interior. Ark Performance springs and Nitto Invo tires make sure the Soul performs as well as its namesake, by upping performance to a chart-topping level.

The name of the Kia says it all: Soul. With NBC’s The Voice inspiring millions of talented people to sing their souls out, this car represents the sheer talent needed to perform in front of a live audience and millions at home. RIDES magazine customized the exterior with a bright red airbrushed The Voice logo on the side, incorporating vinyl on the window portion, as well as the inspiring words “I Want You” illuminated in the lower grille, along with the LED puddle projectors. In order to execute under pressure when you’re driving, 20-inch three-piece Niche Scope wheels color-matched to the vehicle, coupled with Falken tires, add style and confidence.

The four replicated coaches’ chairs are the highlight of an interior that was reupholstered in red leather, black suede and red stitching. Control the “I Want You” logo with the red button on top of the dash. Using a unique platform such as The Voice to become a star requires practice; luckily, an iPad Mini connected to a 40-inch LED TV allows you to use the preloaded The Voice app for singing your heart out through the wireless microphone, amplified through Rockford Fosgate speakers in their fiberglass custom pods.