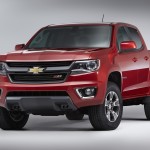 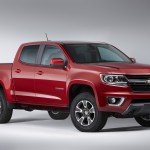 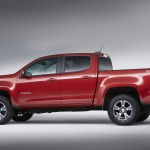 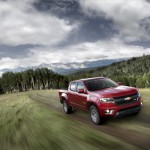 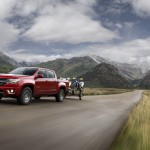 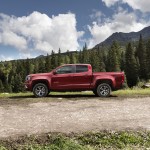 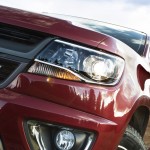 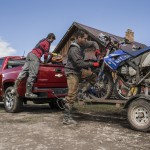 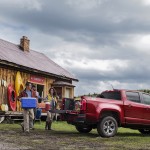 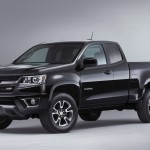 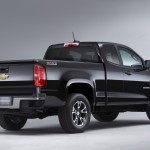 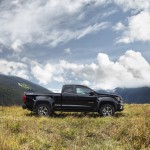 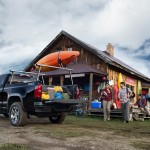 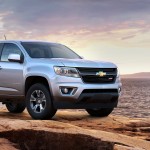 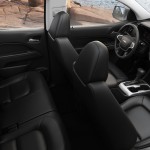 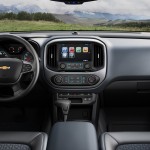 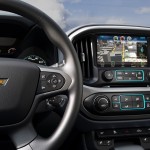 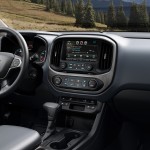 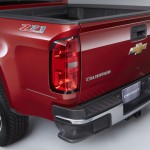 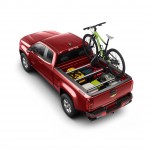 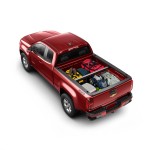 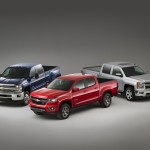 Chevrolet revealed the 2015 Colorado today, and unlike certain compact pickup trucks of the past that shall not be named, Chevy’s cranked out a legit truck that can haul, tow, off-road and strut as well as any full-size—it’s just easier to park.

The all-new 2015 Chevy Colorado, designed specifically for the North American market (i.e. the United States, ’cause Canadians will buy just about anything), will come in three different sizes—an extended cab with a 6-foot bed, a crew cab with a 5-foot bed, and a crew cab with a 6-foot bed; with a choice of two different engines—a 2.5 liter inline-four making 193 horses and 184 lb-ft, and a 3.6 liter V6 making 302 horsepower and 274 lb-ft of torque; and will be offered in three different trim levels—WT, LT and Z71, each available in two-wheel-drive and four-wheel-drive. Chevrolet tapped many of the handy features from the Silverado for Colorado duty, like the standard CornerStep rear bumper and triple-sealed doors for improved quiet and fuel economy.

But the Colorado is a Chevy truck, which means it can take care of its business, too. A tight turning radius of 41 feet means it can maneuver better than most trucks, while a maximum tow rating of more than 6,700 pounds. (A turbodiesel inline-four will be available next year, pushing the Colorado’s work cred even further.) We’re glad to see Chevy jumping back into the small truck game with both feet—it’s a chunk of the car world that’s been neglected for too long. We’re hoping it won’t be too long after the truck drops into dealerships in fall 2014 that we start seeing custom Colorados on the streets.

LOS ANGELES – Chevrolet today unveiled the all-new 2015 Chevrolet Colorado, which will redefine the midsize truck and offer real truck capability and versatility to customers who don’t require a full-size truck.

The new Colorado is built with the DNA of a true Chevy truck, expected to deliver class-leading power, payload and trailering ratings. Colorado goes on sale in fall 2014 as a 2015 model.

“Our strategy is simple: meet the needs of the broadest possible customer base, and let them choose precisely the right truck to meet their needs,” said Mark Reuss, General Motors executive vice president and president of GM North America. “The all-new Colorado benefits from the solid foundation established by the Silverado, and it reinvents the midsize truck while reinvigorating the segment at the same time.”

The new Colorado was developed for the North American truck customer, with distinctive design, comfort and connectivity features, including segment firsts such as available forward collision alert and lane departure warning.

Chevrolet expects Colorado to be the most powerful truck in the segment, allowing owners to haul and tow more. A 2.5L I-4 is standard, and a 3.6L V-6 is available. Each engine is tuned, tested and validated for truck use, and each features direct injection and variable valve timing to make the most of power and efficiency. Each is matched with a six-speed automatic transmission.

When properly equipped, the Colorado is expected to offer class leading payload capacity and trailering capacity of more than 6,700 pounds (3,039 kg). That is more than enough capability to throw a weekend’s worth of camping gear in the bed and tow a boat to a favorite lake.

Colorado will also offer the segment’s only diesel engine in its second year – a proven Duramax 2.8L I-4 turbodiesel already offered in global markets. The diesel engine will expand Colorado’s powertrain lineup to cover the broadest range of needs.

“We designed the Colorado to be the most versatile and most capable in its segment, bar none,” said Jeff Luke, executive engineer, GM Trucks. “Not everyone needs full-size capability, but they still deserve the strength and true-truck attributes that come in larger models. The Colorado delivers capability with confidence – and a fun-to-drive spirit that complements active lifestyles.”

Designed with a zeal for adventure

The Colorado’s North American design is unique, with a confident stance and a sporty demeanor. Taller bedsides, for example, are exclusive to North America and match the aggressive, raked belt line of the cab, creating a distinctive proportion that reinforces the truck’s athleticism while better securing items stored in the bed.

“The new Colorado’s design brings a youthful breath of fresh air to the midsize truck segment and puts a progressive spin on Chevrolet’s true-truck styling,” said Ken Parkinson, executive director of Chevrolet Design. “It’s like the younger, more eager brother of the Silverado – a Chevy truck through and through, with great zeal and a spirit of adventure.”

WT, LT and Z71 trims are available, all in 2WD or 4WD. The off-road-inspired Z71 is the brawniest of the bunch. It also features a gunmetal grille surround – a change from the chrome standard on the other models – projector headlamps and unique 17-inch aluminum wheels.

The Colorado features triple-sealed doors inlaid in the body sides, like the 2014 Silverado, for improved aerodynamic performance and a quieter interior.

To help keep overall mass down and improve the front-to-rear weight balance, the Colorado features a segment-first aluminum hood. It also features the segment’s only active aero grille shutters, which close at certain highway speeds to enhance aerodynamics.

And because it’s a true Chevy truck, the Colorado leaves nothing on the table when it comes to innovative solutions for hauling and accessing cargo:

An interior for work, recreation and everyday comfort

Blending cues from Silverado with a style all its own, the interior of the 2015 Colorado is designed to be comfortable, is cleverly equipped and well connected. A bold, upright instrument panel with large instruments and a central driver information center is similar to Silverado, while featuring a center console with a floor-mounted shifter similar to those found in midsize cars and crossovers.

Colorado cabin designers paid exceptional attention to detail and premium appointments, including a sculpted headliner that enhances headroom, halo lighting on key controls for easier view and an open area at the front of the center console for easier phone charging. The Z71 model features exclusive color and trim details, including embossed seatbacks and contrast stitching.

“We took the best attributes of full-size trucks and midsize cars to develop a passenger space that delivers a balance of unmatched functionality and comfort,” said Parkinson. “It’s designed to be as useful as possible, with storage compartments and clever features throughout, for owners who will use the Colorado as their daily driver and for weekend getaways.”

The new Colorado’s technologies are aimed at complementing owners’ lifestyles with connectivity and other features that support their daily and recreational lives – and help keep them safe, including:

Standard and available features designed to keep the Colorado’s occupants safe before, during and after a crash include:

The Colorado delivers the capability expected of a Chevy truck – including segment-leading payload and trailering. Like the Silverado, the Colorado has a fully boxed perimeter frame, which provides the strength to support its capabilities, as well as a confident, smooth and quiet ride.

A coil-over-type front suspension features aluminum knuckles that are low in mass and high in strength, contributing to a more responsive, immediate feel to driver inputs, as well as efficiency. Colorado also features the segment’s first application of electric power steering, which enhances efficiency by avoiding the energy used by what conventionally is an engine-driven feature.

The Colorado has a short turning radius of about 41 feet (12.5 meters), enabling easier turning in tight areas such as city streets or backing a trailer into a camping spot.

Four-wheel disc brakes, with four-piston front calipers, are standard and feature Duralife™ brake rotors – also pioneered on the 2014 Silverado. They offer up to double the service life, which can save money on maintenance.

Another Chevy truck feature offered on the Colorado is the G80 automatic locking rear differential. Introduced by Chevy more than 40 years ago, it gives drivers a traction advantage when needed. It is standard on Z71 and available on WT and LT.

The 2.5L and 3.6L engines offered in the Colorado are based on proven designs found in other Chevrolet vehicles, but tuned uniquely for truck duty – including more torque at lower rpm – for a more confident feeling of power when the Colorado is loaded or pulling a trailer.

Aluminum blocks and forged-steel crankshafts, along with dual-overhead camshafts with variable valve timing, direct injection and jet-spray piston cooling are features shared on both engines. A number of extended-life components can help reduce maintenance intervals and reduce the cost of ownership.

All models are matched with a six-speed automatic that complements the truck-tuned engines with features that make hauling and trailering easier and more comfortable, including auto grade braking and a tow/haul mode.

Chevrolet will continue to work on and develop the Colorado until the start of production in 2014. The content of this release is based on current GM testing and is subject to change.