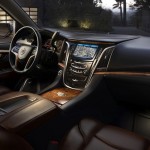 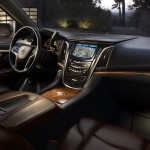 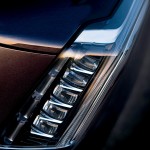 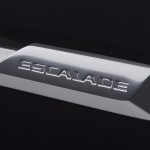 There’re few cars we’re more excited to see revealed this year than the all-new 2015 Cadillac Escalade, which drops October 7th right here in New York City. But the imminent reveal doesn’t mean Cadillac is staying quiet; they’ve been slowly releasing teasers of the new Escalade to keep us interested. And the latest one to drop shows off the 2015 Cadillac Escalade’s sleek new interior.

The new guts bear a clear resemblance to the ones of the XTS and other recent Cadillac models, including a sleek, all-touch center stack, clean, flowing lines and what looks like it might be all-digital gauges. It’s hard to tell from this picture, but it looks like Cadillac has upped the Escalade’s interior material quality, too—a logical decision, as it allows the Escalade to better play against really high-end SUVs like the Range Rover and the Mercedes-Benz GL-Class.

We’ve also included a couple other teaser pictures Cadillac has released of the 2015 Escalade, including one showing off the badge and one showing off the new headlights. We’ll be sure to bring you live pictures from the Escalade reveal next week, though. [Shout-out to Cadillac!]

DETROIT – The 2015 Escalade will advance to a higher level in all aspects, but the greatest changes to Cadillac’s flagship SUV are on the inside.

Advanced technical features and controls are designed to add a boldly modern element to the design, as well as offering the latest features in luxury, connectivity and safety for up to eight occupants.

Cadillac will reveal the 2015 Escalade in New York City on October 7 along with a portrait series and behind-the-scenes video by indie artist Autumn de Wilde.

To RSVP for the livestream, and to stay up to date on images and videos of the 2015 Escalade, please visit youtube.com/Cadillac.