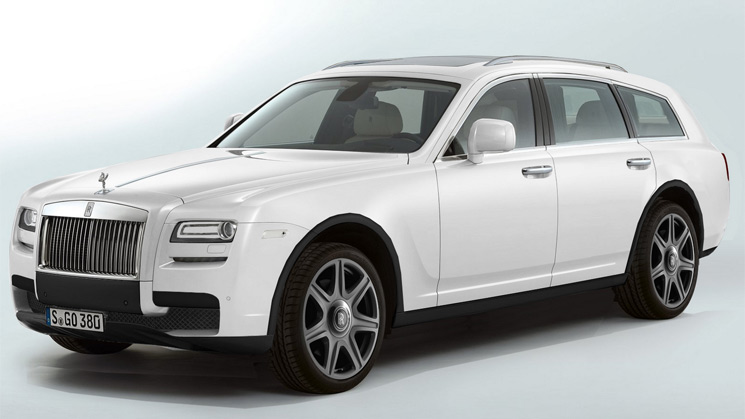 It’s a fact of the modern-day luxury car world: You really can’t compete in the big leagues unless you have something along the lines of an SUV. Bentley, Maserati, Jaguar and Lamborghini both have SUVs coming; Aston Martin‘s been kicking around the idea for a while; and even Ferrari has the FF, which isn’t an SUV, but with all-wheel-drive and a hatchback/wagonoid body style, it’s a lot closer to one than any Ferrari before.

And now it seems that Rolls-Royce—long one of the players in the luxury car game who considers themselves above competition—may be forced to jump in and build some sort of four-wheel-drive of their own. With everyone else getting into the game, Rolls is pretty much leaving money on the table; between China’s new money players, the sheiks of the Middle East, Russia’s 21st century oligarchy, and the real housewives of every big city in America, we’re pretty sure they could sell at least as many SUVs as they sell Ghosts every year.

This Rolls-Royce SUV is still vaporware at this point, so there’s no way of knowing for sure what sort of specs it might have—but considering every other Rolls is powered by a turbocharged V12, that seems a safe bet. Also safe to assume: It’ll be heavy as hell, float along the road like a hovercraft, and have an incredibly bougie interior.

On a final note, part of this Rolls-Royce SUV rumor also suggests that, instead of going with the flow and building a regular SUV, Rolls might instead go with a Ferrari-inspired solution and do an all-wheel-drive station wagon or hatchback. We’d like to see what that looks like…[Shout-out to Automotive News!]