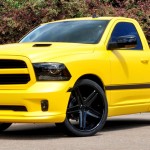 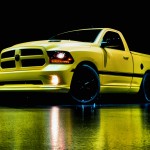 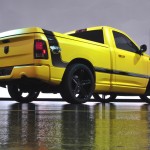 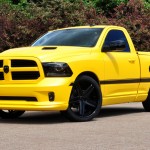 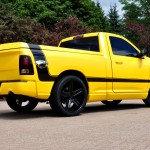 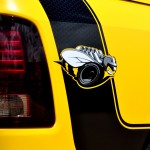 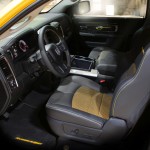 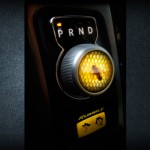 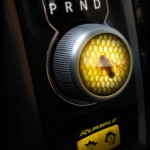 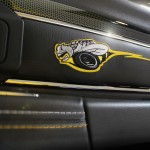 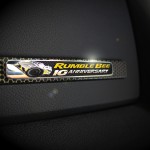 All right, all right, we’ll ease off on the bee puns—but seriously, the new Ram 1500 Rumble Bee Concept has us seriously excited. Between it and the new Ford F-150 Tremor, it seems like we may be on the verge of a street truck renaissance.

Revealed at this year’s Woodward Dream Cruise in Michigan, the Ram 1500 Rumble Bee Concept starts with your basic Ram platform—a rear-wheel-drive, short-bed, regular cab pickup body—and plugs in a 395 horsepower 5.7 liter Hemi V8 and an eight-speed automatic to give it some serious grunt, then adds on a Mopar cold-air intake and a 4.10 gear set for more go. Then come the aftermarket-style changes. Gloss black 24-inch Vellano VRH wheels and a two-inch drop via a King Suspension improve both stance and handling. Matte “Drone Yellow” paint coats almost the whole truck, including the Mopar ground effects kit; the only exceptions are the gloss black grille, hood vents, fuel door, tailpipes and badging, and the black “Speed Bee” design on the sides.

Inside, Ram took the Ram 1500 R/T interior and gave it the Rumble Bee treatment, adding black and yellow sport-mesh seats, and a plentiful helping of Rumble Bee and Ram logos. The rotary shifter dial lights up to reveal a honeycomb pattern—and even has an amber-encased bee located in its center, in true Jurassic Park fashion. A pair of buttons below the shifter control the exhaust cutouts on the cat-back exhaust, one to make it loud—and one to make it even louder.

As of now, Ram hasn’t announced any plans to make the Ram 1500 Rumble Bee a production truck. But there’s no feature on this rig that’s outlandish enough to make production impossible—in fact, for something called a concept, it’s extremely realistic. We’re hoping Ram decides to build it—because we’d rock the hell out of this Rumble Bee. [Shout-out to Ram!]