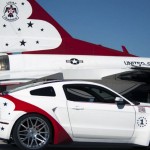 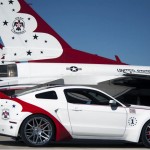 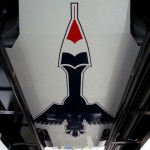 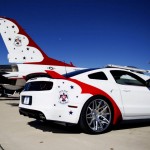 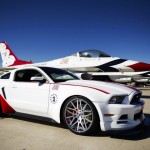 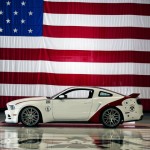 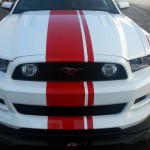 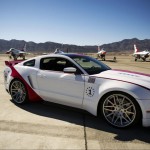 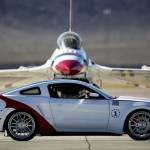 The U.S. Air Force Thunderbirds are considered to be the fastest, multi-jet flight demonstration team in the world. The special edition Mustang will be auctioned off to benefit the Young Eagles program of the Experimental Aircraft Association. The car will be donated by Ford to be sold at the Gathering of Eagles charity event on Thursday, August 1, 2013 during the Experimental Aircraft Association (EAA) AirVenture Oshkosh 2013.

On the exterior, this 5.0L beast is painted with red, white, and blue accents that tie it to the Thunderbirds’ F-16 Falcon. This widebody ‘Stang has a handcrafted and painted “belly pan” that emulates the F-16 Thunderbird. The full body kit includes new front and rear bumpers, side skirts, and extended wheel arches. It’s paired with 22-inch custom Forgiato wheels to further set it apart from the rest. Interior details include: a modded navigation, instrument cluster, and rear-seat delete. The Recaro front seats are embroidered with Thunderbirds elements. Unique sill plates and puddle lamps are installed to project the aircraft’s silhouette when the doors open, rather than the usual prancing pony. Under the hood is a Ford Racing supercharger to create the fireworks this American beast needs. A complete suspension handling pack and Brembo brakes provide extra safety and performance durability. The Mustang is an American icon, and with this paint job nothing screams more “USA.”