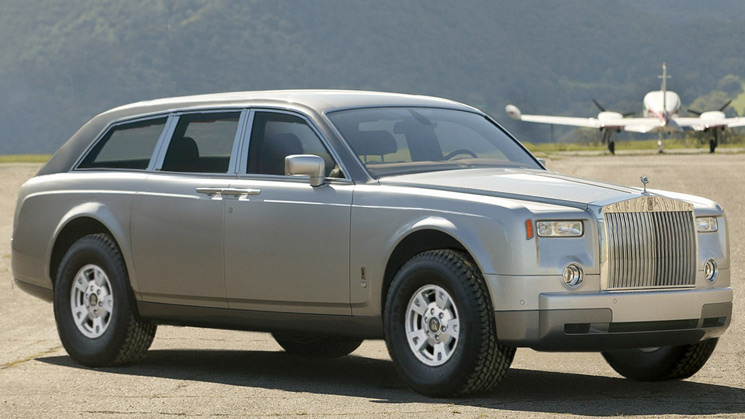 Mercedes-Benz did it. BMW did it. Porsche did it, and Maserati, Lamborghini and Bentley are all going to do it. Bringin’ out an SUV is one of the most popular moves for a luxury car brand to make these days, so why wouldn’t Rolls-Royce want to get in on the game?

Word is, Rolls-Royce’s corporate parent BMW is looking to get out a Roller sport-ute by 2017 or so, in order to keep their super-lux brand from falling behind the likes of Bentley and Lamborghini. While they supposedly considered using a modded version of the Phantom replacement’s platform for the SUV, the underpinning of the big sedan didn’t prove workable for the basis of an SUV—and besides, building an SUV off that platform meant the Rolls-Royce SUV woulda wound up twice as pricey as its nearest competitors.

So instead, Rolls-Royce is looking at the platform of the all-new BMX X5—specifically, the stretched X7 version BMW is rumored to be considering. Designed to fight the Mercedes-Benz GL-Class, the large-and-in-charge three-row X7 would sit atop the BMW SUV lineup—but Rolls-Royce could also take its shell and turn it into an incredibly bougie two-row sport-utility vehicle with tons of room.

A RR SUV would need to be as luxurious as any other vehicle the brand makes, and have just as much presence, too; so air suspension would be a must, along with 21-inch or 22-inch rims standard. But as for what might power this potential potentate’s off-roader, well, that seems to be up in the air. All current Rolls-Royces are powered by V12s, but a motor that size might not fit into the BMW X5/X6/X7 engine bay. If that doesn’t fit, Rolls-Royce might be forced to juice up the twin-turbo V8 currently used in BMWs—or even combine it with a couple electric motors for a hybrid powertrain. A hybrid off-road Rolls-Royce? Man, we hope we see it. [Shout-out to Automobile!]

That photo rendering comes from here, if you’re wondering. We expect the real Rolls-Royce SUV to look much better than that.