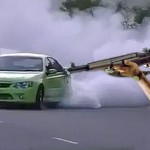 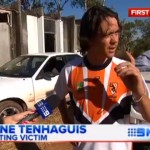 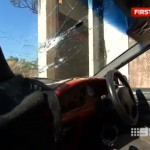 It was a pretty close call for Tenhaguis 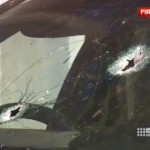 Two of the bullets struck the windshield 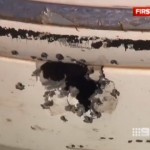 Other rounds punctured the bodywork 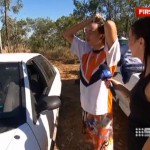 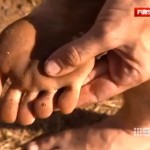 The extent of Tenhaguis’s injuries 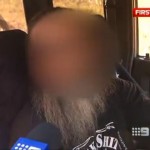 Another local resident annoyed by the frequent burnouts 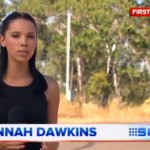 No real reason for this shot, except that we thought the reporter was cute.

We all love rippin’ off a good burnout every now and again, especially those of us who live out in the quieter parts where the po-po are less likely to show up and shut down the fun. And our friends down under in Australia are no different; they love their V8-powered muscle cars as much as we do here in the U.S. But just like in the States, some people in Australia don’t take too kindly to stuntin’—and in one recent incident, those burnouts led to gunfire.

23-year-old Shane Tenhaguis was burning some rubber on his block when his 61-year-old neighbor, apparently at the limits of his enjoyment for the smell of tire smoke, stepped outside, cursed at Tenhaguis (“Motherf**ker, think you’re deadly?!?”), and opened up on his Ford Falcon with his gun. Apparently angrier about his ride being shot at than he was scared of a crazed man shooting at him, Tenhaguis chased his gun-toting neighbor home. “I had a kid inside here,” Tenhaguis said, pointing to his house where his 2-year-old was sleeping at the time. “I was gonna beat the shit outta him too, come up and shoot at my house when I got a kid inside.” Predictably, the old man fired at the hoon in hot pursuit, sending Tenhaguis packing.

“What a f**king froot loop!” Tenhaguis said of his neighbor while talking to reporter Hannah Dawkins of Channel Nine news, while showing her the bullet damage to his car. “What a fruit loop! Who does this?”

Like most real-life crime dramas, the story ended with everyone involved a little worse off. The neighbor was arrested for aggravated assault, improper use of a firearm and reckless endangerment…but Tenhaguis’s car was impounded under Australia’s horrific anti-hooning laws. We suggest watching the video at this link; the quotes above don’t do it justice. (No pun intended.) [via Carscoops]