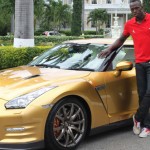 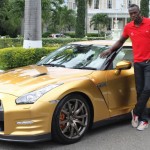 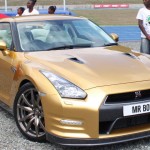 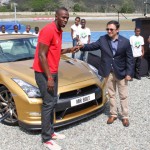 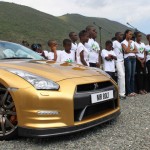 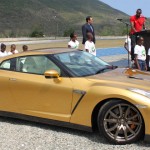 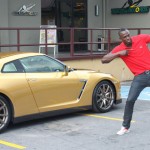 The first gold Nissan GT-R sold for $193,000 during an online auction held from November 22 to December 4, 2012 with the proceeds benefiting Usain Bolt’s charity to help create educational and cultural opportunities for children in Jamaica. In return, the Japanese automaker has handed over the keys to a 2014 Nissan GT-R for Mr. Bolt to enjoy himself. This GT-R has been customized to fit his driving style based on data that Nissan engineers gathered when he test-drove the GT-R lineup at the Nissan headquarters in October. Under the hood Bolt’s Gold GT-R comes powered with a 3.8-liter twin-turbo V-6 engine that provides 545hp and 463 lb-ft of torque and is estimated to have a 0-to-60 time of 2.8 seconds with a full throttle of 190mph.

Contrasting the flashy gold exterior, the interior of the car is a saucy white shade. The hyper-titanium coated RAYS forged wheels add a bit of extra flair to an already attention-grabbing car. A subtle touch includes an exclusive “Spec Bolt” emblem on the car’s body. The interior and exterior colors as well as all of the vehicle’s accessories were chosen by Mr. Bolt himself. Who wouldn’t love that kind of treatment? We congratulate him on the keys to his new ride and commend him on being the “world’s fastest man.”