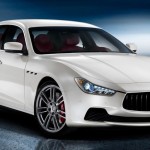 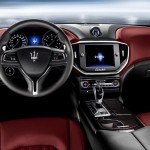 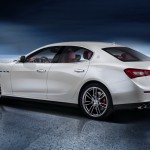 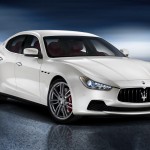 Maserati has revealed their new medium-sized luxury sedan, the Ghibli—and damn if it doesn’t look like a mini-Quattroporte. Which is exactly what we’d been hoping it would look like.

The new Maserati Ghibli will make its official world premiere at the Shanghai Motor Show in a couple weeks, and if all goes as Maserati hopes, expect to see a lot more of this car. It’s a big part in Maserati’s plan to go from a small sports-car builder to a full-on luxury car brand selling 50,000 cars a year. It’ll compete with cars like the Mercedes-Benz E-Class, the Audi A6 and the BMW 5 Series.

Power comes from a choice of two turbocharged 3.0 liter V6 engines—a gasoline one (likely the same one that’s in the new Maserati Quattrporte, where it makes 404 horsepower and 406 lb-ft) and a diesel one, which may seem insane to us in America but is actually an important option to offer if Maserati wants to make inroads in Europe’s luxury car market. Both engines come connected to an eight-speed automatic, and the Ghibli also comes with a choice of rear-wheel-drive or all-wheel-drive. (We’re guessing it’s only a matter of time until they build an M5-fighting version with a twin-turbo V8.)

No word on price yet, but expect it to be cheaper than the Quattrporte and comparable to the upper-level E-Classes and A6s—so, starting around 60 stacks here in the States. Hey, style don’t come cheap! [Shout-out to Maserati!]

The all-new Maserati Ghibli to debut in Shanghai

09/04/2013 – Modena
Maserati has released the first official images of its upcoming four-door sports executive sedan in advance of its debut at the Shanghai Motor Show later this month.

The all-new Ghibli is set to break new ground for Maserati.

The Ghibli will have a sportier character compared to the larger Quattroporte, launched at the beginning of this year. The Ghibli will be available with two turbocharged 3.0-litre V6 engines, an eight-speed automatic transmission and both rear-wheel drive and the new “Q4” all-wheel drive system.

The Ghibli will also become the first Maserati production car in history to be powered by a diesel engine, with a 3.0-litre V6 turbo-diesel.

It is Maserati’s first sedan in this segment and reflects the company’s belief that a growing number of premium executive car buyers are looking to make an individual statement through a car that is distinctive, elegant and luxurious.

The Ghibli will play a significant role in Maserati’s growth plan to sell 50,000 cars per year.