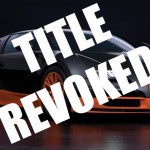 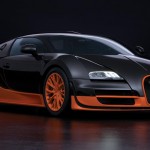 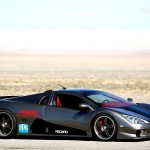 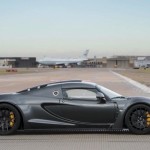 Bugatti’s brand-new teaser that was released today…possibly for their new super-Veyron?

For the last three years, the Bugatti Veyron Super Sport’s tested and proven 267.8 mph top speed has made it the fastest production car in the world, according to the people at Guinness World Records. Or so we thought. Unlike the NFL, as it turns out, Guinness records can be reviewed even years later—and upon further review, the ruling on the field has been overturned.

See, while the Veyron Super Sport that did 268 mph was bone stock, Bugatti made the choice to govern all production versions to 258 mph—for “safety reasons,” they said, though we’re not sure how 258 mph is all that much safer than 268. However, Bugatti reportedly whipped up five “World Record Edition” Veyron Super Sport examples clad in the same orange-and-black paint as the actual record-setting car which were not governed to 258, thereby making the road car identical to the record-setting one.

Now, though, Bugatti is saying all five World Record Edition Super Sport cars were, in fact, limited to 258 all this time—which means the record-setting car was not identical to any of the ones that went on sale. The Guinness World Records people consider removing the speed limiter a “modification” to the vehicle, rendering it non-stock (though we’d argue adding the governor was the modification, not removing it), which means the Bugatti Veyron Super Sport is no longer considered the fastest car in the world by Guinness.

Guinness says the change means there is no current record holder, as they’re reviewing their options with “expert external consultants.” That said, we’d imagine the title would revert to the SSC Ultimate Aero TT, which held the record of 256.18 mph from 2007 until 2010. Unless, of course, John Hennessey can have his Lotus-based Hennessey Venom GT certified by Guinness as a production car, in which case—based on the 265 mph run his car hit earlier this year—the Venom GT would likely become the fastest production car on Earth.

And all this could change soon anyway, as Bugatti is expected to drop a “super-Veyron” sometime this year that (rumor has it) will weigh at least 250 pounds less than the Super Sport, make as much as 1,600 horsepower, and could top out at 280 mph—faster than any of them. These are interesting times…[Shout-out to Yahoo! Autos and Driving.co.uk!]