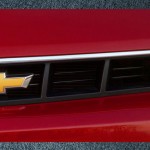 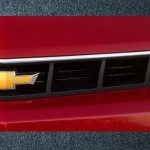 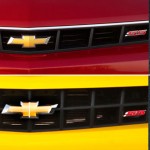 Chevrolet will drop a refreshed and revised Camaro on us for the 2014 model year, and they’ll do it at the New York International Auto Show on Wednesday, March 27th, at 12:45pm. But in the meantime, they’ve dropped the first picture of the car—a close-up of the grille.

As you can see in the image comparing the new grille to that of the 2013 car we’ve included above, the 2014 Camaro’s grille is a bit more narrow, with a chrome piece at the top; it also trades the egg-crate style for simpler vertical lines within the grille itself. We’re hoping this means a generally classier Camaro for the new model year…along, of course, with a Camaro powered by the 7.0 liter LS7 motor from the Corvette Z06. [Shout-out to Chevrolet!]