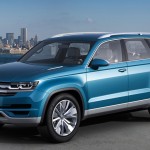 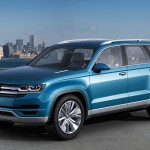 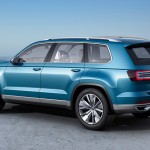 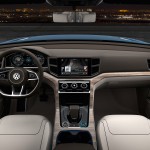 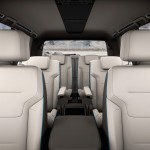 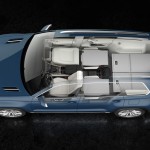 The Volkswagen CrossBlue SUV concept has just made its global debut at the North American International Auto Show. Specifically developed for the U.S. and Canada, this concept (if produced) will flesh out other SUVs from the Volkswagen lineup – above the Tiguan and below the premium Touareg. Volkswagen’s manufacturer estimated fuel economy at 89 mpg combined in electric mode and 35 mpg as a hybrid. Aside from being economical, fuel-wise, the CrossBlue offers impressive performance for a mid-size crossover. It’s said to produce 305 horsepower and 516 pound-feet of torque with a push of a button, drivers can switch from “Eco” mode to “Sport” mode to release this SUV’s maximum potential power doing 0 to 60 mph in 7.2 seconds.

The CrossBlue concept, which includes six individual seats, combines the visual look of an SUV with the spaciousness and flexibility of a minivan. The car has all-around good visibility and extensive safety features including up to 12 air bags making it the perfect family fit. Created in Germany, the CrossBlue combines the clean lines of German Volkswagen design with the masculine character of a typical American SUV. Painted in “CrossBlue Glass Flake”, the concept is 196.3 inches long, 79.3 inches wide, and 68.2 inches high. In contrast with its body color, the car features stainless-steel trims that run all around its lower body. The wide front and rear tracks assume a very confident stance with 21-inch aluminum alloy-wheels on 235/45 tires and significantly flared wheel-wells. The CrossBlue’s prominent and lengthy hood integrates the engine’s air intakes complementing a long roofline that rides over a very short frontal overhang. Equipped with two “fuel doors,” this SUV can easily act as an auxiliary electrical generator. The first “fuel door” is the filler neck for the diesel tank is on the passenger side. Two additional electrical sockets are integrated behind the door on the driver’s side. The first socket is used to charge the lithium-ion battery; the second can be utilized as a plug-in to connect electrical devices such as coolers or camping lights. We look forward to seeing this concept produced and prove that efficiency can go along with sportiness too.