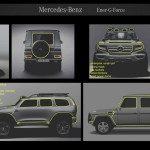 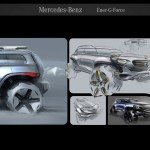 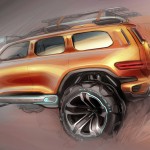 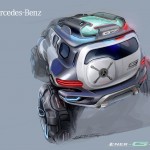 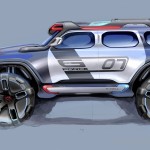 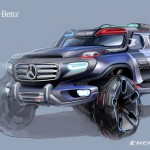 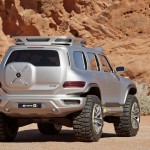 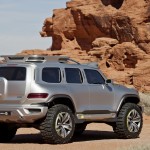 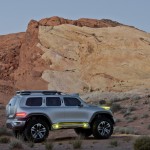 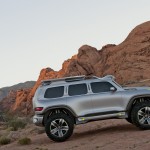 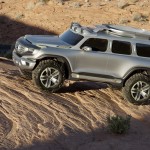 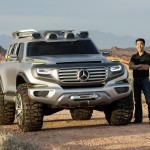 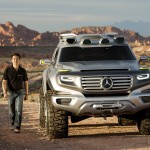 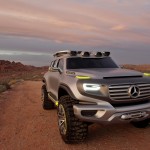 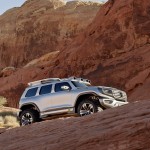 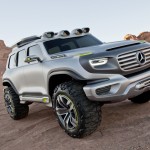 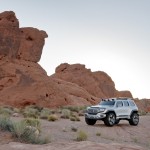 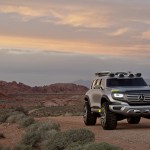 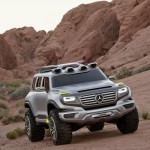 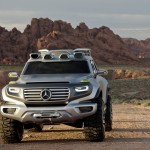 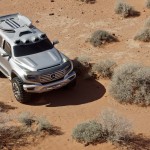 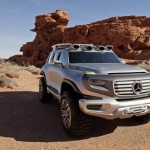 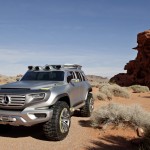 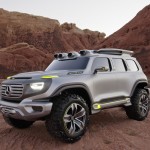 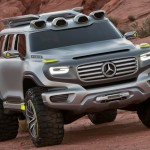 Every year, the Los Angeles Auto Show throws a design competition where major car companies’ designers are given a chance to let their imaginations run wild and free with some crazy sci-fi premise. This year’s competition asked the designers to sketch out a design for the highway patrol car of 2025, but unlike most of the companies participating, Mercedes didn’t just stop at the drawing board. They actually built their car: the Mercedes-Benz Ener-G-Force concept.

In Mercedes-Benz’s view of 2025, the po-po will have to deal with roads that are more crowded and a population that places a bigger emphasis on the environment—both protecting it and enjoying it. So the Ener-G-Force is designed as an environmentally-friendly SUV: It uses magic to split water into fuel (well, Mercedes says it uses something called a “hydro-tech converter” to split liquid water into hydrogen and oxygen to run a fuel cell, but trust us, if Mercedes-Benz had that technology, they wouldn’t need to make cars to make money), with an individual electric motor behind each 20″ wheel to provide power. A 360-degree scanner on the roof continuously monitors the ground and tells the car to adjust the suspension to upcoming conditions; it sounds like some Minority Report stuff, but Mercedes-Benz actually has a similar system going into the next-generation S-Class.

Outside, the Mercedes-Benz Ener-G-Force Concept takes after the classic Mercedes-Benz G-Class, which has been kickin’ it since 1979 with pretty minor changes along the way. It’s brash, bold, and big, designed to remind ya of the G-Class while giving it a futuristic twist. It’s a pretty dope look, and we wouldn’t mind seeing it on a big Benz SUV come 2025—which’ll be about how long it takes for us to save up enough to buy one, anyway! [Shout-out to Mercedes-Benz!]

MONTVALE, NJ – Is it possible that the Mercedes-Benz G-Class will still be around in 2025? A cool design study from Mercedes-Benz demonstrates how the genes of the classic off-roader from 1979 may still assert themselves far into the future. It is based on the concept of a future police car developed for the Los Angeles Design Challenge.

The Los Angeles Design Challenge 2012 looks far ahead with a quest for the “Highway Patrol Vehicle 2025”. Law enforcement will have to prepare for even more crowded roads with electronically monitored and guided traffic, a much larger population and changes in human behavior. People will still feel young and active even later in life. Outdoor activities will dominate leisure, as will the desire for freedom and adventure. The new times will also call for new police vehicles. They must be able to reach any place conceivable quickly and reliably – even far away from any pavement. And they must do so in an exceptionally environmentally friendly way using alternative energy sources. Enhanced green-car characteristics and off-road capabilities will be among the fundamental virtues of a police car in 2025.

As an environmentally friendly SUV, the Ener-G-Force, which Mercedes-Benz is presenting in Los Angeles as a design study, meets these requirements and would be fully capable of supporting police and emergency services in every corner of the world. Gorden Wagener, Director of Design at Mercedes-Benz Cars: “The Ener-G-Force is the vision of an off-roader that, while reflecting tomorrow’s adventures, also invokes the genes of the Mercedes-Benz off-road icon, the G-Class. Modern and cool, it could also be a clue about a new beginning for the off-road design idiom of Mercedes-Benz”.

The small glass areas make the police vehicle a safe cocoon for law enforcement officers who are faced with many dangers. Emergency lights integrated into the roof are impossible to ignore; the striking front leaves no doubt as to the commanding presence of the police, and the gigantic wheels guarantee the right-of-way even where no way exists.

Back from the future – clean concept for beyond tomorrow
Of course the concept of the Ener-G-Force for the Los Angeles Design Challenge is pure, rendered science fiction. However, the notion of designing tomorrow’s off-roader intrigued the designers at the Mercedes-Benz Advanced Design Studio in Carlsbad, California to such an extent that they evolved the vision of a police version into a civilian version and even built a 1:1-scale model. Like the “Highway Patrol Vehicle 2025”, the shape of the civilian Ener-G-Force is modeled after the G-Class, the off-road icon whose continuous history goes all the way back to the 1970s and that to this very day still tackles the future as a stylistically and technologically advanced SUV.

Like the police version, the model of the civilian Ener-G-Force is unmistakably inspired by the G-Class, which has long been considered an automotive icon.However, it presents a radical reinterpretation of this classic that looks far into the future. Important genes such as proportions and design elements were completely redesigned and updated in a clean concept for beyond tomorrow.Ener-G-Force Designer Hubert Lee: “Of course we wanted to take a clear step forward, but we also wanted the G’s characteristic features”. The Ener-G-Forcehas a similar profile, however with a high shoulder line and scaled-down glass areas.

While the clear design idiom of the G-Class has remained, all surfaces are designed to express intensity and tension. The meticulously executed details are also a clear indication that the Ener-G-Force is the product of modern times. Like the G-Class, the Ener-G-Force sports a front with an expressive radiator grille that incorporates the headlamps. The LEDs in the headlamps form the shape of the letter ‘G’, which gives the Ener-G-Force a bold, dominating appearance. The front turn signals and running lights are mounted on top of the fenders, a trademark G-Class element.

The distinctive roof and the 3-panel greenhouse also echo fundamental genes of the classic G-Class from Mercedes-Benz, but represent a clear step forward.This is also evident in the large wheels, whose 20-inch rims give the Ener-G-Force a powerful, towering stance. The Ener-G-Force also plays on the utility factor in an entirely new way. For instance, the distinctive feature in the rear is a slightly off-center pull-out compartment whose cover occupies the traditional location of the spare wheel cover of the classic G-Class. This pull-out tool box can hold a wide variety of equipment that are quickly within reach without having to open the entire tailgate.

Bursting with energy
The Ener-G-Force stores recycled water in tanks on the roof, and transfers it to the “hydro-tech converter,” where natural and renewable resources are converted into hydrogen for operating the fuel cells. The storage units for the electricity generated in this process are housed easily accessible in the striking side skirts. The Ener-G-Force emits nothing but water, has an operating range of about 500 miles and as a result truly is a green car. Four wheel-hub motors, whose output for each individual wheel is adapted precisely to the respective terrain by high-performance electronics, provide the pulling power. A “Terra-Scan” 360-degree topography scanner on the roof permanently scans the surroundings and uses the results to adjust the spring and damping rates as well as other suspension parameters for maximum traction on the respective surface, regardless of whether it is on- or off-road.

The strikingly styled side skirts house either the energy storage units or hot-swappable battery packs. Changes in the color of the illumination of the side skirts indicate the operating and charge status of the energy packs. A roof rack and additional lamps are integrated into the roof. The entire design appears to have been carved from a single piece. The overall presentation of the Ener-G-Force is clean – stylistically and functionally.