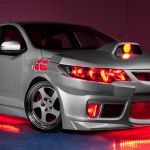 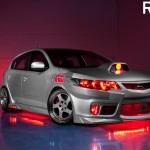 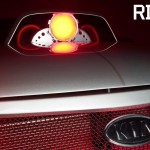 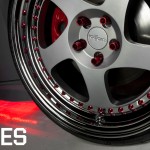 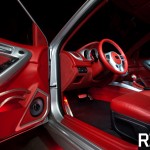 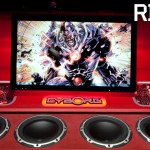 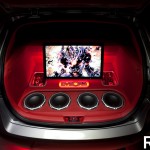 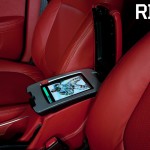 Did you like the Batman tribute car that we built in conjunction with DC Comics and Kia? Well, that was just the beginning. See, DC Comics wanted Kia and some of the biggest names in custom cars to build tribute vehicles for every member of the Justice League, and as part of that effort, we at RIDES helped throw together not one but two one-off Kias for them. Part one was Batman’s Kia Optima. Say hello to part two: the RIDES/DC Comics Kia Forte 5-door for Cyborg.

In honor of Cyborg’s many metal parts, the tribute Kia was painted in BASF Aztek Silver, as requested by DC’s Jim Lee. Widened metal fenders are meant to bring to mind Cyborg’s technologically-strengthened arms, while the custom hood scoop with illuminated icon recalls the Justice League member’s chest piece. The car’s aggressive stance comes thanks to Ark Performance coilovers and 18″ Rotiform TMB wheels, equipped with custom matte gray center, chrome step-lip and red anodized bolts and wrapped in General Tires. The aggressive bumper from the Kia Forte Koup, custom side skirts and a 2″ rear widebody setup complete the exterior changes.

Inside, the interior has been redecorated in perforated red leather and red suede, with trim pieces in red and silver. For a solid audio punch, the Cyborg tribute Kia has been outfitted with JL Audio 6.5” and 5.25” in custom rear door panels and four 8” JL Audio subwoofers in a custom suede-and-leather-wrapped box in the trunk. And since one of Cyborg’s powers is being able to talk to computers, a 27″ Lenovo touchscreen was molded into the rear hatch, while a Samsung Galaxy Tab 2 was added to the center console, so the car’s occupants can always stay linked into the world.

Cyborg’s a little less famous than Bruce Wayne’s alter ego, so in case you need a little catching up, here’s his origin in a nutshell: High school football star Victor Stone was killed when an alien artifact exploded, but his scientist father was able to bring him back to life using a combination of barely-understood Earthly and extraterrestrial technologies—though leaving him mostly made of metal and technology. As Cyborg, Vic Stone has incredible speed and strength, is able to fly and teleport, and can summon up powerful weapons like a destructive sound cannon. And as we mentioned, he can also directly communicate with computers of all types—which is a superpower we’d definitely like to have.

The Cyborg Kia Forte debuted today at the 2012 SEMA Show in Las Vegas. Check it out in the gallery above, and let us know what you think!