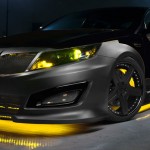 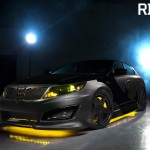 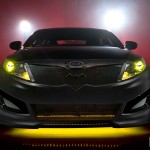 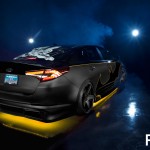 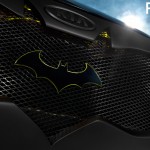 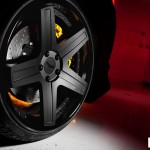 When DC Comics decided they wanted to pay tribute to Batman with a one-off custom car, they knew exactly who to turn to—RIDES Magazine. (After all, we are the guys who featured the Justice League on our cover a couple issues back.) Together with Kia, we worked with Jim Lee and the rest of the crew at DC to design a Kia Optima that would rise to the challenge of honoring the Dark Knight, then commissioned Lux Motorwerks to build the Batman tribute car in time for the 2012 New York Comic Con.

Just like Batman’s usual ride (you know, the Batmobile), this Kia has been modified through and through. Two tone BASM R-M black paint—both matte and gloss—slathered all over the Kia’s body helps it blend into the Gotham City (or Manhattan) night, while the yellow pinstriping outlining the Bat-logo leaves no doubt as to whom this car was made to recognize. The custom body kit, consisting of new bumpers, sideskirts, hood vents and a rear spoiler, was formed by hand specifically for this Optima, while the front grille has been redesigned to resemble Batman’s chest plate icon. The headlights even double as tiny Bat-Signal projectors.

In addition, GFG whipped up a set of 20″ Drama Wheels painted to match the car, with Continental tires wrapping around them and tiny Batman logos on the center caps. Behind those 20″ GFGs, Ksport Big Brake stoppers are there to bring the car down from superheroic speeds, while a Ksport coilover kit gives RIDES‘s Batman tribute car the ideal stance for a superhero’s ride. Jim Lee even whipped up an original Batman graphic for the rear window.

Inside, the seats, headliner, door panels and dashboard have all been reupholstered in leather and suede, because while Bruce Wayne may spend his nights cracking the skulls of Gotham’s criminals, he’s still a billionaire. Yellow Batman logos and yellow LEDs are dotted throught the interior, and handful of Batarangs are tucked away in the center console, just in case. Because while this Kia may not be the Batmobile, few heroes know better than Batman the value of planning ahead.

2 Responses to “Batman Scores A Custom Car Thanks To Kia, DC Comics And RIDES!”