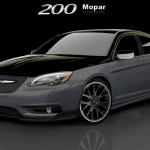 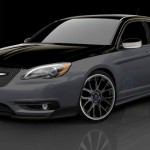 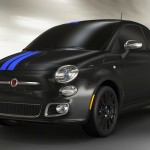 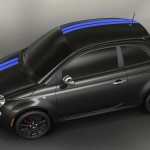 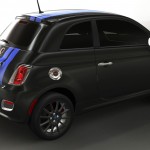 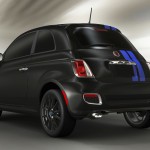 To show of their skills, the Mopar division took on two new cars for this year’s Detroit Auto Show—the Chrysler 200 and the Fiat 500. The Chrysler, which replaces the Sebring in Chrysler’s lineup, scored two-tone black-over-gray paint and 19″ rims, along with some sporty-looking hood louvers, front and rear spoilers and a chrome exhaust tip. Hardly the most extensive mods, but they do quite a bit for the 200.

The Fiat 500, for its part, scores blue stripes on its black exterior, with gloss black rims and chrome exhaust tip, fuel door, mirror covers and grill surround. Inside, Katzkin leather colored to match the exterior covers the seats, with carbon fiber pieces around the cabin to set things off. All in all, the two rides are pretty understated, but the mods on both make each of the cars more appealing to our eyes. (Chrysler also brought a Mopar-modified Dodge Durango, a Jeep Wrangler and two Dodge Rams to the show, but they’d all been seen before. Read about ’em in the press release below.) Now we just wanna see somebody try and throw 24s on that 500…[Shout-out to Chrysler!]

Company Continues to Leverage its Service, Parts and Customer-care Brand

In each brand display for Chrysler, Dodge, Fiat, Jeep® and Ram, a Moparized vehicle will be prominently displayed. In addition, vehicles throughout the exhibit will feature a variety of Mopar performance parts and accessories.

“More than 30 percent of the people who are in the market for a new vehicle are influenced by the breadth and availability of aftermarket accessories,” said Pietro Gorlier, President and CEO of Mopar, Chrysler Group LLC’s service, parts and customer-care brand. “With our company’s launch of 16 new vehicles, Mopar is coming to the party with a truck-load of accessories that will fit a variety of lifestyles.”

In its 48,800 sq.-ft. exhibit on the main floor in the middle of Oakland Hall at Cobo Center, Chrysler Group will feature more than 100 Mopar accessories and performance parts throughout its display of 57 vehicles. Customized vehicles will include the Chrysler 200, Dodge Durango, Fiat 500, Jeep Wrangler Call of Duty: Black Ops Edition, and the Ram Outdoorsman.

Also in the Ram display, Mopar’s Ram Runner – which was first shown at the 2010 Jeep Safari in Moab, Utah – will be prominently displayed in the back of a Ram 5500 Chassis Cab race hauler. Since its debut, the Ram Runner video has generated more than 100,000 views on social media sites. Mopar announced today that production for the Ram Runner parts package will begin in March.

In addition to Moparized vehicles, the company will also feature live demos in its Accessorization Station. To show ease of installation, Mopar accessories will be installed on the 2011 Jeep Wrangler Call of Duty: Black Ops Edition.

“Our goal is to show consumers how easy it is to personalize and accessorize their ride,” said Gorlier. “And like we did with the introduction of our Mopar Ram Runner, we will gauge reaction to accessories that we plan to offer in the future.”

Following is a selection of featured Moparized vehicles that will be on display in the Chrysler Group exhibit:

The Mopar Ram Runner, inspired by Baja-style desert racing, is a 4×4 unlike any other Ram. The rigors of off-road racing require large tires, plenty of ground clearance, extreme durability and a sophisticated suspension system capable of withstanding tremendous impact. These features are combined into a package that is stable at speed and rock-solid in the corners. Inspired by trophy trucks, steel front fenders and rear bed-sides are replaced with fiberglass, allowing tremendous suspension articulation with zero interference.

2012 Fiat 500
The Fiat brand marks its return to the North American market with the 2012 Fiat 500 (Cinquecento). With its beautiful Italian styling, timeless functionality, efficient design and innovative technology – the same attributes that made the original version a timeless icon – the new Fiat 500 is relevant for an entirely new generation of drivers.

Following is a list of Mopar accessories that will be featured on the 2012 Fiat 500:

The 2011 Jeep Wrangler Call of Duty: Black Ops Edition is based on the Jeep Wrangler Rubicon model and features dark Rubicon wheels in a high-gloss Mineral Gray. The vehicle’s exterior color is black and features Call of Duty: Black Ops graphics on the roof and front quarter panels. The vehicle delivers legendary Jeep capability, aggressive 32-inch off-road tires, live axles with locking differentials in the front and rear, and a two-speed transfer case.

Following is a list of Mopar accessories that will be featured on the Jeep Wrangler Call of Duty: Black Ops Edition:

Following is a list of Mopar accessories that will be featured on the Ram Outdoorsman:

Chrysler introduces the new 200 mid-size sedan. Offering consumers exceptional craftsmanship inside and out, a refined and spirited driving experience, innovative technology, an abundance of standard safety features and an extraordinary level of standard content, the 2011 Chrysler 200 is an exciting alternative for customers that want style and substance, all at a surprising value.

Mopar lowered the car three inches and created its own interpretation of the Chrysler 200 while adding the following accessories:

Dodge views the new Citadel as the ultimate expression of the 2011 Dodge Durango, the perfect canvas for the distinguished SUV enthusiast. First shown at the 2010 Specialty Equipment Market Association (SEMA) show, the vehicle was developed as a representation of the current trend in tasteful customization.

This special edition of the Citadel utilizes the clean lines of the 2011 Dodge Durango. Its stunning, shiny black paint color is the perfect backdrop for the evolution of the modern urban SUV. Its 22-inch custom-forged aluminum Super Alloy wheels are highly polished with hyper-silver accents. The Citadel also features an exclusive chrome-textured grille and polished stainless steel tips of the Mopar/Corsa custom exhaust. The Citadel “Black & Tan”, riding on Pirelli tires, was dropped with Mopar lowering springs, complementing its stunning new stance.

The shiny black exterior is matched on the inside with an all-new interior, crafted by the new Chrysler interior studio that is bent on redefining American quality and unparalleled comfort. The timeless design features sculpted soft panels throughout with world-class fit and finish, complete with the liberal use of premium materials and three rows of gorgeous Nappa leather seats. The new “Black & Tan” interior combo was inspired by some of the finest super cars in the world.

Following is a list of Mopar accessories that will be featured on the Dodge Durango Citadel “Black and Tan”:

More than 70 Years of Mopar
When Chrysler bought Dodge in 1928, the need for a dedicated parts manufacturer, supplier and distribution system to support the growing enterprise led to the formation of the Chrysler Motor Parts Corporation (CMPC) in 1929.

Mopar (a simple contraction of the words Motor and PARts) was trademarked for a line of antifreeze products in 1937. It also was widely used as a moniker for the CMPC. The Mopar brand made its mark in the 1960s-the muscle-car era. The Chrysler Corporation built race-ready Dodge and Plymouth “package cars” equipped with special high-performance parts. Mopar carried a line of “special parts” for super stock drag racers and developed its racing parts division called Mopar Performance Parts to enhance speed and handling for both road and racing use.