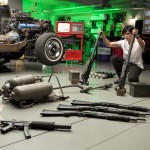 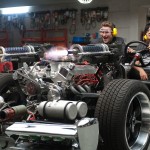 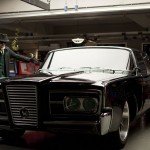 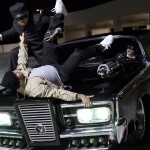 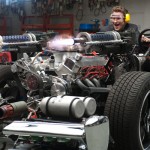 While the posters for the new film The Green Hornet may not include its name, the Chrysler Imperial known as Black Beauty has just as much of a starring role as lead characters Britt Reid (a.k.a the Green Hornet) and Kato, played by Seth Rogen and Jay Chou. In the film, the Black Beauty serves as the ride of choice for Rogen’s Green Hornet and Chou’s sidekick Kato, a pair of costumed heroes who lack superpowers but have (in Chou’s case) insane martial arts skills or (in Rogen’s case) a desire to have fun and make a difference.

To aid them in fighting crime, the Black Beauty is modded out with enough armor and weaponry to enable to the duo to blast through half of Los Angeles, as they do in the film’s climax. Missiles, hood-, trunk- and door-mounted machine guns, bulletproof armor, and reinflating tires are all added onto the car—and all put to good use throughout the film. (There’s even a fax machine, in case our heroes need to receive information from someone in 1995.) While Rogen and Chou’s characters bounce back and forth between being hilarious and obnoxious, the car is consistently awesome. In fact, it’s worth heading to the theater just to see the Black Beauty make a lot of bad guys black-and-blue.

The Green Hornet opens this Friday!