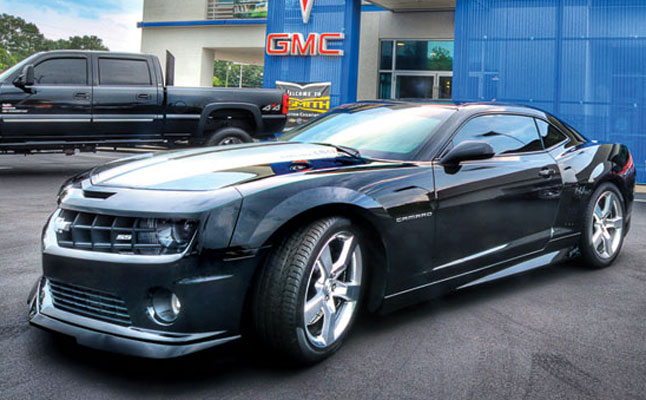 Back in the ’60s, a handful of Chevy dealerships decided they wanted Camaros with more swagger and more speed. Using General Motors’s Central Office Production Order system, they were able to build the ‘Maros they wanted using performance pieces built by GM itself; the cars were dubbed the COPO Camaros, after the ordering system.

Well, it may be 2011, but as far as two Chevrolet dealers are concerned, it might as well still be the ’60s: NeSmith Chevrolet of Georgia and DeNooyer Chevrolet of Albany, NY have each built their very own 21st Century versions of the COPO Camaro.

NeSmith’s car uses a tuned version of the 6.2 liter supercharged V8 from the Corvette ZR1 that cranks out 700 horsepower, along with Baer brakes. Pfadt Racing suspension pieces, an American Racing Headers exhaust, a classy body kit and Drive Shaft Shop axles. Built with the help of Jen Jac’s Restorations of Savannah, the car—known as the “Storm”—goes for $125,000.

Up north, DeNooyer’s ‘Maro pulls out the Camaro S’s stock V8 for a 454 crate motor, but only after the big-block recieves port fuel injection, a ZR1 clutch, an accessory drive system and a custom flywheel from Redline Motorsports of Schenectady. They call the resulting car the HTR-SS454, but we’d just call it straight up cool. [Shout-out to The Detroit News!]