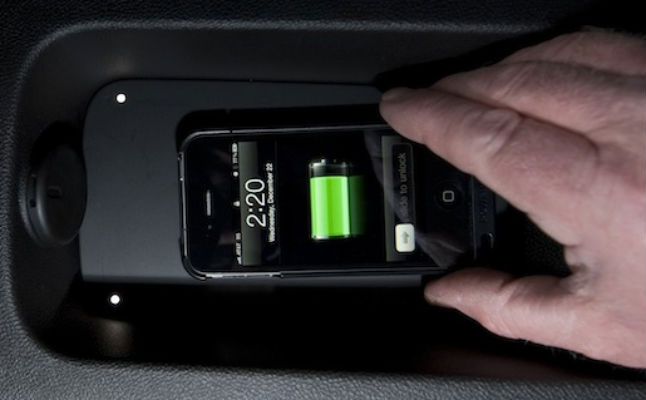 Just as they’re asking people to start plugging in their cars at night, General Motors is telling customers they can toss another cord—the one that connects their cell phones to their cigarette lighters. Starting with the Volt plug-in hybrid, GM cars and trucks will be getting Powermats—wireless charging pads for small electronic devices like phones, MP3 players and even handheld video games.

From the looks of the picture above, it seems like the pad will be at the bottom of a well somewhere in the car, so even if you’re drivin’ Fast And Furious-style, your phone won’t go flyin’ across your ride. GM plans to start installing Powermats in cars in 2012; while the Volt will be first, expect to see it spread across all four of the General’s brands pretty quickly. Check the full press blast below for more. [Shout-out to General Motors!]

Automaker Invests in Start-Up to Do Away With Charging Cords

LAS VEGAS – General Motors and Powermat, a pioneer in wireless charging technology, announced a commercial agreement today that will eliminate the need for charging cords for personal electronic devices in many future Chevrolet, Buick, GMC and Cadillac products beginning mid-2012.

The Chevrolet Volt, conceived as a reinvention of the automobile that would help reduce America’s dependence on oil, while providing the assurance of an extended driving range, will be one of the first GM vehicles to offer this technology. The technology is expected to revolutionize how electronic devices are charged in a car.

Powermat, a private firm, was founded in 2007 and offers wireless charging products for the home in a number of retail stores, including Best Buy, Target and Wal-Mart.

Poliakine is excited to start with the Chevrolet Volt, which has swept major Car of the Year awards to date.

“GM is among the rarest of giants in today’s business climate: a forward-thinking innovator with the courage and good sense to care about the well-being of the consumer and the well-being of our planet,” Poliakine said.

Jon Lauckner, who helped create the Volt concept and now is President of GM Ventures, has been dreaming about a technology like Powermat for years.

“We first developed the Volt concept car in 2006,” Lauckner said. “The intent was to revolutionize every aspect of the car, not just the propulsion system. We had something like this in mind even then, and we think it will have widespread appeal.”