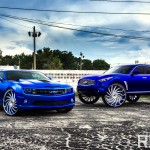 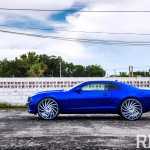 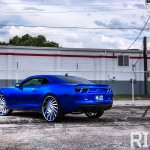 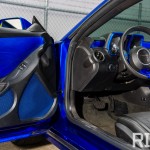 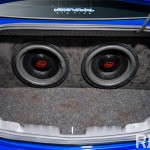 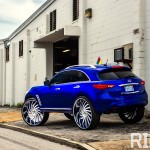 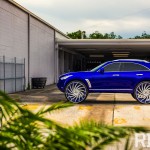 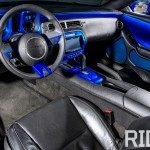 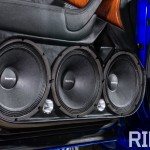 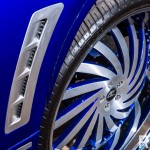 When outsiders speak of Florida’s whip game, they tend to lump all the automotive styles together as if they’re uniform. And although there is one common denominator—big rims—everything else is subject strictly to regional vibes. That sentiment couldn’t be more true in Central Florida, as its the capital of new-school rides rockin’ big rims, bright paint and loud music.

Two years ago, Travis Daniels of Orlando, Florida, copped his 2013 Camaro straight off the lot with modest intentions for its direction. “When I first got it, I thought I was gonna do some fours and call it a day,” says Travis. “But the Florida in me made me put the Kandy on it.” This proverbial pressure Travis felt is a way of life in Central Florida; having an old-school is respected but not desired as much as a new body. “Most people in Central Florida build cars to stunt and swerve. You can’t really clown like that in an old-school,” explains Travis. “People will hit the club strictly for the let-out, go to this gas station, pull up and stunt on one another.” Travis tried various renditions of his Camaro before getting it right as, admittedly, he may have done it too big initially.

“At first I did orange on 26-inch Forgis and then 28-inch floaters,” says Travis. “I didn’t really like how it looked with the eights—it was just too big.” Travis decided to give it one more attempt and create something that still repped his region but had a broader appeal. Doing it the right way, Travis purchased all-new fenders and bumpers, discarding the mangled body panels that were modified for the larger wheels. Travis also opted for a 2015 Camaro SS hood, which went nicely with this overall aesthetic. For the paint, which can make or break any bright new-school, he went to the only painter he trusts to do it right, Glen aka Kandy Guru in Jacksonville, Florida. “I think that’s my seventh Kandy from Glen,” says Travis. “He’s the best Kandy painter in Florida, and he’s the only person I’d ever let paint a car of mine.” To top off the exterior, Travis opted for a set of 26-inch Amani wheels with a brushed and body-matching finish that further establishes his classy yet custom approach.

Inside Travis stuck with his theme, letting aspects of the exterior bleed into the guts but never in an overwhelming fashion. “I didn’t want the big, gaudy look on the doors,” says Travis. He enlisted Audio Addictions to compose a set of door panels encompassing enough speakers to shut down a concert. Now that Travis’ marvelous ’Maro meets his rigorous requirements, he plans on stuntin’ just a bit more, then upgrading to something with a few more ponies under the hood.

The FX game picked up some serious steam a little over five years ago, and ever since, people have been taking this perfect platform and creating some amazing creations. Claudy, the owner of this interesting Infiniti, decided to jump into the game headfirst, leap-frogging competitors in his path. “I basically wanted to bring out the best FX you’ve ever seen,” he says. “I had been liking those trucks for a while and just decided to do it.”

Claudy started with the paint, which varies a bit from Travis’ Camaro and is unique in its own right. “I got the Kandy Burple because there are no other cars out right now with that color,” says Claudy. Wet Willy’s Autoworks in Miami laid down the distinctive hue that took this fierce FX to the next level. For the shoes, Claudy stepped up to the big leagues and went with brushed Amani Vornados as well, but he upped the inches considerably. “I was gonna go 28s,” says Claudy. “And then I was like, fuck it, I’ll go all-out and go 32s.” Claudy hit up WTW in Fort Lauderdale for the 32-inchers and the lift to accommodate the massive rolling gear.

Adhering to one of the attributes that makes Central Florida so distinctive—extremely loud music—Claudy hit up Unlimited Customs in Orlando, which loaded the FX to the brim with a slew of premium Stetsom, Sundown and Beyma equipment. “If I was gonna bring out a car on 32s, I figured I can’t put any bullshit music in there,” says Claudy. “I wanted to be one of the loudest cars out there.” Even though Claudy insists his FX is far from complete, with interior upgrades on the horizon, he still contends he’s earned the top spot. “I know I’m King FX right now,” he proclaims. “Number one.”