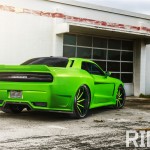 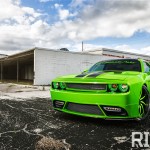 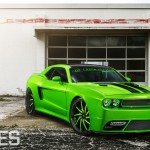 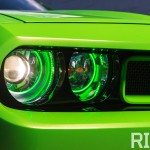 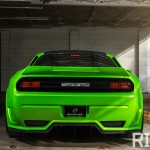 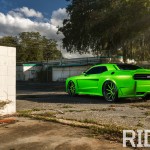 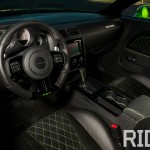 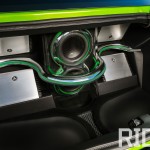 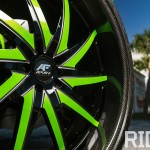 As Ultimate Auto of Orlando, Florida, steadily ascends into the custom-shop upper echelon, they’ve put themselves in an interesting predicament: having to outdo themselves and their prior builds. In 2013 Ultimate Auto built one of the top Challengers ever to hit the scene, utilizing state-of-the-art technology constructed entirely in-house at their dealership-size (no, really, it’s an old Pontiac dealer) facility. So when putting together their latest promo vehicle, also a widebody Challenger, they wanted to pursue the same methods while challenging themselves to take it to the next level and shock the crowds in Vegas at the 2014 SEMA show.

Although the formula and techniques applied to the build were similar to the preceding Challenger, it was imperative to the Ultimate Auto crew that the latest rendition vary significantly. “We used the same concept from our last widebody Challenger, but like every build, you want to make the next one bigger and badder,” explains Ultimate Auto owner Joe Labon. And if this Challenger were going to stand out, the hue would have to vary considerably from the norm. With that in mind, Joe and his team opted to go loud and bright on the paint scheme. “Normally we’re known for clean colors—not as bright and loud,” explains Joe. “But this being a promo and a SEMA vehicle, we wanted to do something with some pop and make it stand out.” Ultimate Auto ended up creating an exclusive BASF mix (the only paint brand they use at the shop), which they called “Green With Envy,” and although it might simply look neon green from a distance, it’s much more involved. “When you get up on the car, you can see the pearl and depth in the paint,” insists Joe.

Aside from the wonderful widebody modifications and remarkable fascia customizations achieved using their clay-modeling technique, the most unique yet subtle exterior modification to this vibrant vehicle is the exhaust and, more specifically, where it exits. At first glance, it looks as if Ultimate Auto simply added an extra vent on the C-pillar, but upon ignition it reveals much more. The Ultimate crew outdid themselves by routing the exhaust into the upper part of the body, not only making an astounding visual but creating a tone like none other. For the wheels, a set of 24-inch Amani Forged Vona wheels—measuring 9 inches wide up front and a massive 15 out back—were mounted up. The black and green Amanis also feature a carbon-fiber lip to match the rest of the carbon fiber on the car and are wrapped in a set of Pirelli P-Zero rubber.

The unexpected gem of the build finds its home in the trunk with a gorgeous and deceptively powerful audio system. With only two 8-inch JL Audio W7 subwoofers and a boatload of JL Audio power, the master technicians at Ultimate Auto constructed an enclosure that would fool you into thinking something much more lies under that trunk lid. “The bass output is incredible,” proclaims Joe. “If you sat in the car, never in a million years would you think it was two eights.”

With the SRT complete and shutting down shows wherever it goes, Ultimate Auto has once again proved their position in the game and successfully one-upped their former project. And as this Challenger sits complete, Ultimate Auto is already working on a widebody SRT Hellcat Challenger that is set to outdo even this build.