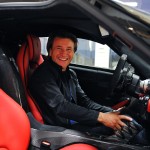 RIDES: How many cars do you currently own?
Robert Herjavec: I have around 20 cars. I’m not a big collector. I love to drive, and the problem is there’s always something new, faster, with better handling, so I keep buying them.

What was the first car you ever drove?
Something like a Caprice station wagon, one of those old wood-paneled cars that my dad had.

How did that driving experience compare to the exotics today?
I love to drive. I have always loved cars, and people who know me know that that’s been a constant in my life since I could walk. People who don’t know me think I like really expensive things; I just like cars. The price point really doesn’t matter. I have a Dodge Hellcat on order, and I’m super excited to get it. It’s 707 horsepower in a car that cost $60,000 with big-ass wheels—how could you not love that? I have an appreciation for speed and beautiful things.

Is there a car you’d never sell?
It’s the car I bought for my dad when I first sold my business. He would always say, “If I make money one day, I’m going to buy a Cadillac.” I bought a 2000 Cadillac sedan DeVille in pearl white, took him to a showroom, got him to sit in it. I said, “Today is the day,” flipped the visor and gave him the keys. He passed away about five years ago. I don’t think I would ever sell that car.

You tweeted a picture of your brand-new LaFerrari last fall. Is it the most prized member of your fleet?
Yeah, for sure—zero to 60 in 2.1 [seconds], 1,000 horsepower…it’s incredible. The only downside is it’s like having a magnet for people to follow you. It’s so over the top, it’s really difficult to go anywhere.

What other cars are in your fleet?
My latest car, a 1958 Porsche 356 cab four-cam. It’s beautiful. That is the iconic California car. When I think of driving down the Pacific Coast Highway, that’s the car I think of—the James Dean Porsche convertible. The car weighs nothing, and you get this feeling that you’re going a million miles an hour. It’s in the opening sequence of Dancing with the Stars.

How did you segue into racing?
I got to the point where driving on the streets is great, but you want to push the car and yourself to the limit, so I decided to try the Ferrari Challenge. I have been racing for four years.

Is it fair to label you a Ferrari enthusiast or is that an understatement?
I have a fantastic relationship with Ferrari, and I’m definitely a Ferrari enthusiast, but I think I’m a car enthusiast. I’m not snooty about it being a Ferrari. I mean, I love Ferraris because I think they’re such incredible cars.

• Bruno Mars “Locked Out of Heaven”

• Justin Timberlake “What Goes Around…Comes Around”