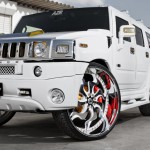 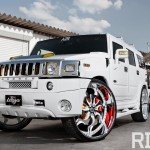 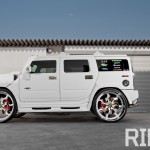 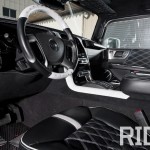 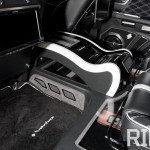 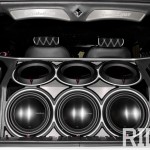 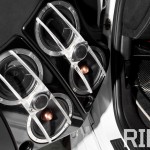 Most of us who appreciated the Hummer H1 for being the tremendous, seemingly indestructible beast that it was would agree that the H2 was a big step backward in terms of performance and beauty. And about the H3…let’s not even go there. Countless times a Hummer would make an appearance at a car show, and the reactions from the public were always mixed: some with displeasure and some with admiration (which is understandable). The problem is, stock from the factory, it seems somewhat lost in its look, or it looks awkward on stock wheels, or it’s too bulky and stiff to be of any use off the road.

But all those preconceived notions about the H2 being a failure fade into the mist when you put one in the hands of the Japanese custom-car heads at Azzurre Motoring. Each modification was a calculated step to lighten up the miserable H2. The Asanti VF603 wheels, for example, are a perfect fit. Unlike street-racing wheels with narrow spokes and huge gaps in between, which obviously don’t belong on the meaty Hummer, these new Asantis have more body. Not too much body, though, like spinners, which would take away from the serious attitude this SUV should maintain.

Inside, the rear bench was swapped out for two Recaro seats, which make a hell of a lot more room and intensify the luxuriousness this beastly whip already has going for it. And behind each front seat is a Pioneer TVM-1100 screen. When inside, the passenger (or driver) is completely surrounded by Rockford Fosgate audio, whether they are highs or mids, amps, subs or 10-farad competition capacitors, so there’s no need to wonder if anyone else within driving distance has anything louder—’cause they don’t.

To make it even more badass, the interior is completely redone with black leather and diamond stitching. The exterior is painted white, reminiscent of rare ivory, with subtle hints of gold on the door handles, around lights and mirrors, and even some on the hood and roof.

So step back and look at it; notice that it isn’t a lifted off-road monster, so there’s no need to judge if from an off-road lens. And it’s not meant to be compared with low, fast street cars, either. Instead, it has that unique, OG, badass ambience. When everything is said and done, this H2 is seriously dope and in good taste.