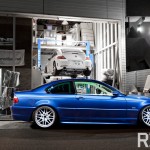 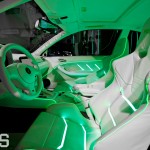 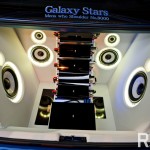 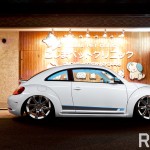 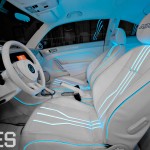 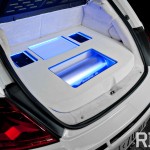 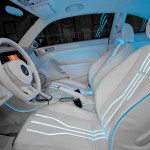 If you’ve gotten this far through this issue, it should be pretty clear that the custom-car game in Japan is played for keeps. When people in Japan customize their rides, they do so to win—inside and out. Which means any shop needs to be operating on the highest level possible if they hope to stay in business. And when it comes to custom interiors, nobody in the Land of the Rising Sun can rise above Newing.

With a decade of modifying cars under his belt, Akiyasu Ikeda has a solid grasp on what it takes to stand out in Japan’s competitive custom-car scene. Quality and attention to detail are key in the country, and Ikeda has staked out a spot for himself and his company as the ones to come to for a high-quality interior. “Many Japanese custom cars will have a fancy exterior but a rather stock interior,” Ikeda says. “A Newing car will have more attention placed on the interior.”

Ikeda prides himself on cleanly balancing the car’s exterior and interior elements, as well as coming up with unique ideas for the insides of whatever car is placed before him. If you’re looking for proof, look no further than the BMW here with its denim-upholstered interior, or the Volkswagen pictured above with glowing strips of light embedded into the white-leather seats and trim. Newing’s interiors are next level—the kind of feature sure to shut down a car show.

That kind of quality doesn’t come easily, mind you. It took Ikeda more than one year after he first came up with the idea of glowing trim to perfect the look, though he says he’s extremely pleased with the way it turned out. (He describes the white VW Beetle with glowing guts as one of the best cars he’s ever built, and we can understand why. It may be the only Bug we’d ever consider driving.) Likewise, his denim-interior look might also appear showstoppingly fresh, but Ikeda says he’s still looking to refine his blue jean–upholstery technique. He also drops vague hints that Newing is working on a way to give car interiors something of an “antique” look—it isn’t quite clear what he means, but he seems to have something specific in mind. If it’s anything like Newing’s other interiors—and we have every reason to expect it will be—Ikeda’s next trick is sure to further cement his shop’s status at the top of Japan’s custom interior class.