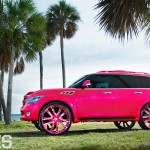 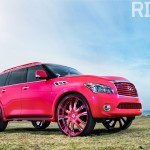 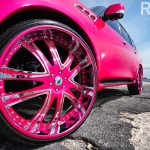 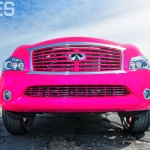 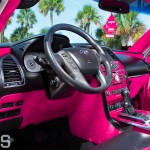 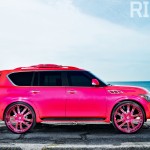 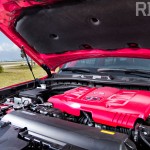 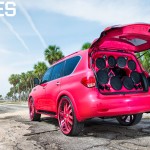 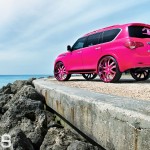 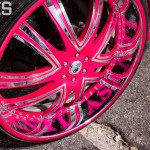 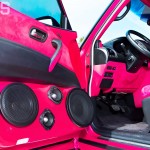 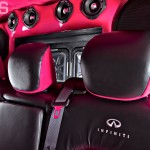 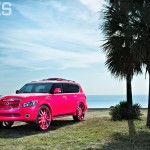 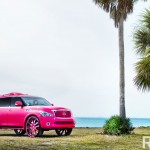 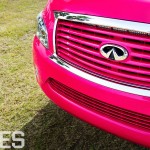 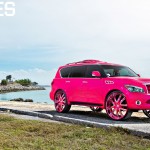 The second-generation Infiniti QX56 is one bougie ride. It arrives, in stock form, laden with posh features like a blind-spot detection system, heated and cooled seats, and even 22-inch wheels. And while there are multitudes of customized renditions of its smaller sibling, the FX, there’s yet to be a fully flipped new QX. Perhaps the lack of full-blown examples is because of its price tag, a staggering $60K pre-owned and almost $80K new—roughly triple that of an older, used FX. Thankfully, the fellas at GRP Customs of Sarasota, Florida, and Mad Marks Stereo of Bradenton, Florida, have never been afraid to rip apart a ride initially intended to usher rich kids from private school to soccer practice—even at those prices.

Coming off their recent triumph, a baby-blue Mercedes-Benz R500 (featured in RIDES September 2012), the guys at GRP decided to take on another challenge—this time of Japanese descent. “It was a new body style that we hadn’t seen anybody try yet,” explains Jerry of GRP. “And we wanted to be the first to go all the way with one.” The recipe for the rollin’ renovation was nearly identical to the Benz truck’s: Shock the world by painting it a poignant hue, and fill it with custom fiberglass and enough audio to shut down a small concert. As with all their paint jobs, GRP completely disassembled the opulent automobile, and to their surprise and delight, it wasn’t nearly as complex as the R500. “That truck was real simple to do, much easier than the Mercedes,” explains Jerry. “We didn’t have a problem with this car; it was fun.” He continues, “We took all the windows out and doors off to paint it, and everything went back on smooth.”

After the exclusive watermelon shade was laid down, the most important task was revamping the interior—specifically the custom fiberglass and audio. As they usually do, GRP linked up with their friends at Mad Marks Stereo in Bradenton, as having constructed countless top-quality rides, they are considered experts in custom fabrication and audio. “I had a vision of how I wanted it to look, and Mad Marks made it happen for me,” says Jerry. “If you can dream it, they can make it happen—they’re the best.” To complete the interior, pink suede was incorporated throughout, while a bit of the factory black leather was allowed to remain as a reminder of this rig’s plush beginnings.

To round out the ruby ride, Jerry opted for a set of 30-inch Asanti wheels on super-thin Lexani tires—and again, to his pleasure, this fitment was effortless. “These were the most simple wheels I’ve ever done: I just took the old ones off and put the new ones on,” explains Jerry. “And the wheels didn’t affect the ride at all. We do 110 on 75 all the time!” As the truck has made its rounds, the Internet and streets alike have been buzzin’, and Jerry and his team are on to the next one as they’ve rightfully achieved stunter status yet again. “I don’t think anybody can mess with us right now,” says Jerry. “It’s all for the love of the game, though—we just want to push the next guy to go harder so we can come back again.”