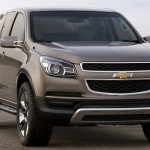 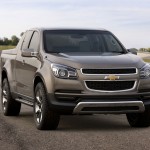 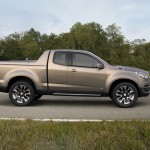 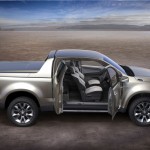 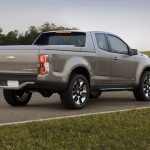 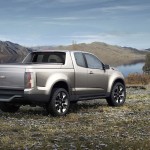 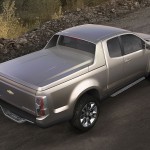 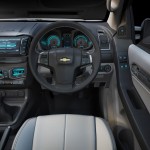 Chevy’s full-size truck game is all but untouchable, but when it comes to smaller pickups, the Bowtie brigade doesn’t bring much to the party. That’s not a dig against them—the compact and midsize pickup segments are pretty much dead in America. Chevrolet’s Colorado was introduced back in 2004 and hasn’t been changed much since. None of its competitors in the small-truck field have been significantly refreshed since 2005. In the States, full-size trucks are king.

But that’s the U.S., where the roads are wide and the people are too. In other parts of the world, where gas costs major guap and most people make in a year what the average American earns in a month, small pickups are big business. So it’s no surprise Chevrolet chose to unwrap their vision of the compact-truck future not in the U.S.A. but in Thailand—the world’s largest market for midsize pickups.

TOUGH AS THE ROCKIES

If a pickup truck wants to succeed, it needs to be strong, but it also needs to look the part, and the Colorado Show Truck places a lot of emphasis on looking like it’s been hitting the gym—hard. The wedged angles, squint-eyed headlamps and flat flanks of the current Colorado have been tossed out with last week’s trash. In their place, the new truck wears bulging fenders, curved lines and clean, black-masked headlights with integrated LEDs. Twenty-inch aluminum rims coated in what Chevy calls a “liquid metal” finish and off-road-ready Cooper 285/50/20 tires help give the truck a brawler’s stance.

The Colorado’s strength goes beneath the skin, too. General Motors’ global vehicle chief engineer, Roberto Rempel, spent several months in Thailand seeing how the Thai people use their trucks, and once he had a sense of the abuse they put their vehicles through, he and his team designed the Colorado to be able to take all the punishment owners could dish out. A 2.8-liter turbo diesel lies under the hood, with a five-speed manual transmission and four-wheel-drive system dishing all that power to the ground.

But being tough doesn’t mean this truck can’t have a classy interior. Gauges, instruments and buttons are lit up with cool blue light, just like a Jaguar XF, while light-colored leather coats the seats. In the middle of the dashboard lies a seven-inch LCD screen that displays and controls the stereo, the driver’s cell phone and the navigation system, and it even allows the truck’s occupants to connect to the Internet.

If you dig the Colorado Show Truck’s clean styling, you’re in luck: The production vehicle should look very similar when it hits showrooms this year. Showrooms in Thailand, that is; General Motors isn’t saying whether the new Colorado will be sold in other markets. That said, the company did stress that the new truck was developed as part of GM’s global product development establishment—then went on to reveal a second concept version, called the Rally Colorado Concept, at an auto show in Buenos Aires. Like we said, GM ain’t talking. But considering the new Colorado would up the ante in both style and substance in the small pickup arena, bringing it to the United States seems like a winning move.