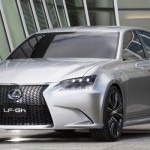 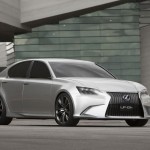 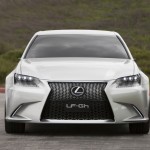 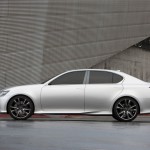 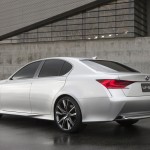 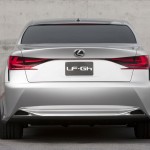 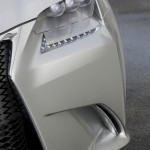 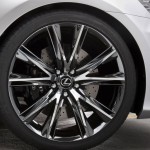 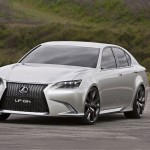 OUT WITH THE OLD

In the automotive world, most cars lose their fresh, new appeal shortly after they’re brought to the market. If it’s been on the showroom floor for five years without at least one major update, it’s considered an old hag. So in car years, the current Lexus GS sedan—now almost eight years old—is positively ancient. It’s so outdated, it was one of the last cars in America to be sold with a cassette deck (a cassette deck!), and you probably wouldn’t have been the first to try to shove your iPod in there, either.

Next year the current GS should finally head off to the big parking lot in the sky—but Lexus is giving everyone a peek at what its replacement will look like with the unarguably dope LF-Gh concept. You might be getting sick of the awkwardly alphabetized Lexus nomenclature, but it actually stands for something: Lexus Future Grand-touring Hybrid. Got it? Good.

THE STYLE OF TOMORROW

The dimensions of the LF-Gh’s sleek body sit within spitting distance of the current GS. It runs on an equally sized wheelbase, and the concept is less than two inches bigger in every dimension. But that’s about the only way the concept’s exterior is similar to the car it’s scheduled to replace. The GS’s subtle lines have given way to hard-edged creases, while the wide-eyed headlights of old have been replaced with narrow LEDs, delivering a Samuel L. Jackson stare-down into oncoming traffic.

Familiarize yourself with that hourglass-shaped grille; it’s set to become one of the brand’s trademark design features. The car’s design is meant to be equal parts practical and emotional, but above all else, it’s meant to make a statement: The Lexus sports sedan of tomorrow won’t be a car you want to mess with—except to modify, of course.

As the lowercase “h” at the end of its name reveals, the LF-Gh uses both gasoline and electricity to move itself around. Much like its corporate parent, Toyota, hybrids are big at Lexus: 50 percent of their lineup is composed of hybrid versions, and they’re the only luxury carmaker in the States to offer cars that come exclusively with gas-electric powertrains.

Lexus isn’t giving details on the drivetrain inside this sleek, future saloon, but the current GS is available with a 3.5-liter V6 mated to an electric motor, and together they generate 340 horsepower. As with many concept cars, what’s actually under the LF-Gh’s hood may be very different from what we expect. Considering Lexus is boasting that the LF-Gh represents a “high-performance concept,” the production version likely won’t lack punch when it hits the road in the coming year(s). Futuristic looks and 21st-century power—glad to see Lexus is leaving the tape deck in the past.