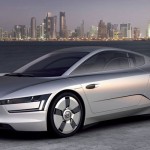 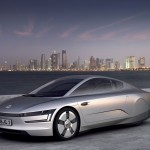 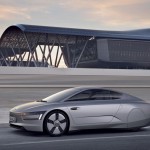 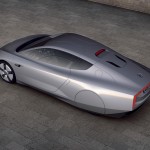 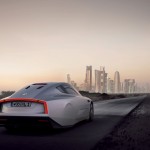 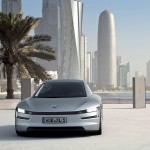 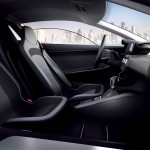 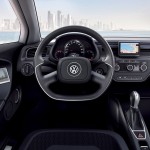 NINE YEARS IN THE MAKING

The XL1 is the peak of Volkswagen’s almost- decade-long quest to build what the German carmaker describes as a “one-liter car”—more specifically, a car capable of traveling 100 kilometers on one liter of diesel fuel, or 261 miles per gallon. The first prototype built in 2002 was hardly practical: Its sole source of power was a one-cylinder diesel engine making a pathetic 8.4 horsepower, and the passenger seat was located behind the driver—not so comfortable. The second generation, unveiled in 2009, was more powerful, but it stuck with the antisocial tandem seating arrangement of the first prototype and couldn’t achieve Volkswagen’s fuel-economy goals.

The heart of the XL1 is its plug-in hybrid drivetrain. The oil-burning portion of the powerplant is a 0.8-liter two-cylinder turbo diesel generating 48 horsepower; the electric side of the hybrid is composed of a 27 horsepower electric motor connected to a lithium-ion battery. On a full charge, the car can go almost 22 miles on electric power alone. A seven-speed dual-clutch gearbox connects the propulsion system to the rear wheels.

IT’S ALL IN THE NUMBERS

The Volkswagen XL1 concept will travel 261 miles on one gallon of fuel. That’s about five times greater than the most fuel-efficient car currently on sale in America, the Toyota Prius, which only manages a combined 50 mpg. In case you were wondering, this VW sips 26 times less fuel than its corporate grandfather, the Bugatti Veyron. In fact, the XL1 is so economical, it could travel from New York City to Los Angeles on 10.7 gallons of fuel. Not crazy enough for you? Fact check: The XL1 produces 0.3 pounds of carbon dioxide per mile—one-fifth as much as the average human would exhale while walking the same distance.

Apart from its powertrain, the other reason this carbon-fiber Dub achieves such impressive fuel economy is that it only weighs 1,753 pounds. That sleek skin doesn’t just look slippery, either; the XL1’s lines were sculpted to provide minimal wind resistance, giving the car a drag coefficient of 0.186—half as much as a Ferrari F50. Gullwing doors make entering and exiting the car easier, while the mirrors have been replaced with video cameras to further reduce drag.

TAKING IT TO THE STREETS

The XL1 was unveiled at the inaugural 2011 Qatar Motor Show in concept form, but it won’t be staying that way for long. Volkswagen has announced plans to bring the super-efficient car into showrooms by 2013. According to Volkswagen CEO Martin Winterkorn, the car will start out with a small production run of around 100 units to be sold in Germany, but it will eventually make it to China and the United States. Road trip, anyone?