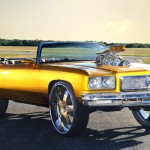 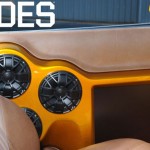 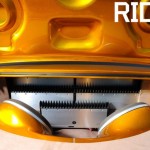 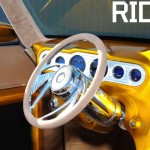 If you copped the most recent Donk, Box & Bubble mag, you obviously peeped the ruby-red ’72 rockin’ the first set of staggered 30s on skinnies and possibly read some lofty claims from us in the story. For example, we mentioned it would “take an Overhaulin’ cast’s worth of people and a couple hundred stacks” to get to that level again. Well, someone has done it—and only months later. Insert wheel in mouth.

The owner of this voluminous ’vert is Jonathan Ivy, a 24-year-old entrepreneur extraordinaire reigning from Kilgore, Texas—not exactly a mecca for outlandish Donks. “Honestly, it started for me when I saw the checkered-flag Donk in the Rick Ross video [Editor’s note: And on the cover of DBB Vol. 1] back in the day, and I started looking for a clean one,” explains Jonathan. “I ended up finding one in perfect condition in town.” Jonathan’s journey launched in January 2009 with his favorite piece of the puzzle: the motor. “I think the motor is one of the main components in having a top-notch Donk,” he says. “Why spend the money on a paint job, rims and custom interior, but your car is smoking and won’t crank half the time?!” Jonathan employed Smitty’s 4×4 of Hallsville, Texas, to go all the way in on the 496 big block, adding forged internals and a supercharger, among many other performance components, resulting in an estimated 1,300hp. Smitty’s also beefed up the drivetrain, adding a stout rear end and tranny that can withstand up to 2,000hp.

Scrapping his original plan, Jonathan decided to up his shoe game a bit. “I originally was going to do 28-inch Asantis, but I decided to step it up,” explains Jonathan. “I wanted to have the baddest Donk around so everyone would know Texas can build one just as bad as the Florida boys, and nobody was doing staggered Forgiato 30s, so I went with those.” Adhering to the unspoken rules of the game, the crew at One Stop Automotive in White Oak, Texas, played a Donk-sized version of Operation to get the 30s properly tucked under the car. “I think the lifted cars are played out and have been for years,” says Jonathan. “I personally like to see as much of the rim as possible tucked in the fender—it just looks a lot better and gives it a cleaner look.”

With the car complete (for now), Jonathan is appeased by his sled’s stature. “At the moment, I feel that I have the baddest one out until proven otherwise,” proclaims Jonathan. “There are a lot of clean cars in the game, and the red one from Duval is the biggest competition. But I see a few things on his I would change, and I am sure there are a few things on mine he would change too.” Jonathan continues, “I don’t see anyone else with staggered 30-inch Forgiatos and 1,300 horsepower, though!”