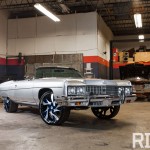 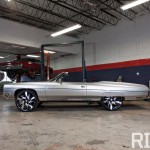 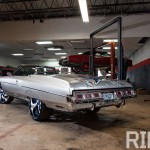 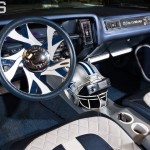 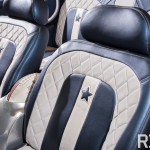 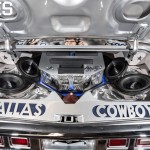 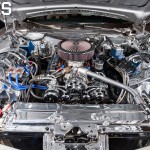 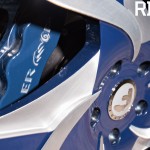 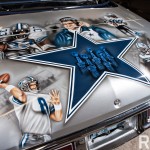 In the 30 years that followed Super Bowl I, the Dallas Cowboys won five championships, but in the 17 years since, they have experienced a drought worthy of a Ken Burns documentary. Despite the years of heartache, the resolve for America’s Team remains strong in Dallas and around the nation, as made clear by the owner of this 1973 Chevrolet Caprice convertible.

Though the owner of this Florida Donk wanted to remain as anonymous as the eight different Cowboys starting QBs in the five years between Aikman and Romo, the car’s builders at I-95 Motorsports helped shed some light on the project. “He is just a really big Dallas Cowboys fan,” says Bobbie Jo Lewis of I-95. “That was the purpose of the build from the beginning.”

From the front and side, this ’73 is subdued with its platinum-silver paint and chrome accents sittin’ clean on 26-inch Forgiato Mistos. It’s not until you see the rear of this Chevy that the owner’s passion becomes apparent with an airbrushed mural of ’Boys notables: Aikman, Smith, Irvin and Dorsett, all under the watchful eye of Coach Johnson. The Cowboys decor carries over to the trunk’s inside, which also houses four MMATS subs and amps. Sitting inside the custom leather seats adorned with the Lone Star insignia, you’ll feel like you’re seated in the club level of Jerry World rather than a traditional Donk.

While it’s hard to overlook the Cowboys theme, the detail on this, aside from the homage to America’s Team, would still have it gracing the pages of DBB. Arguably the most impressive aspect of this Chevy occurs not under the trunk but under the hood. The powerhouse of this ’73 is a 400 small block that runs on E85 (the first Donk to do so, according to Bobbie Jo). And while that certainly sets it apart, it’s the chrome that makes it pop. Nearly every surface of the engine bay, from the wheel wells up to the hood hinges, shines as bright as the Lombardi trophy.

It’s hard to say whether the ’Boys will bring home that sixth trophy this year, but if things go south, at least one owner will be able to take solace on Sundays behind the wheel of his Caprice ’vert.