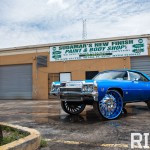 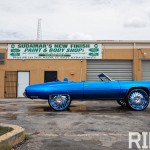 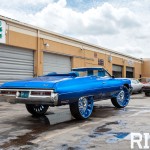 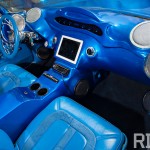 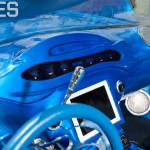 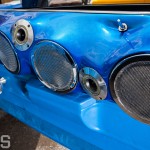 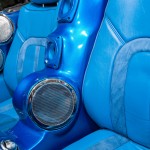 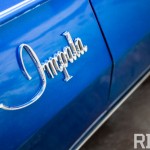 Behind The Scenes Video: DONK- Fall 2013 from RIDES Magazine on Vimeo.

For Aaron, the owner of this blue spaceship, the obsession with Donks has been brewing inside his ’72 for several stages now. Though this is his one and only Donk, Aaron has seen many iterations of the same car: different paints, wheels and interiors laid out before his eyes, always looking for the next stage in this Donk’s development.

Like the Mars rover, this Donk is out of this world. With enough fiberglass to build a C2 Corvette (there are 80 hours of work in the fiberglass alone), there’s plenty of eye candy inside. From the all-digital dash encapsulated within the leaping antelope it signifies, the car’s interior is a portal to another dimension. The iPad that controls all of the car’s audio is centrally located for optimum user experience—right within arm’s reach for either driver or passenger, though good luck controlling the stereo in someone else’s car!

The Asanti Biscaynes show off that flamboyant lifestyle known throughout the Donk world by reflecting all sorts of light into the 20-spoke shiners painted Kandy Ocean Blue to match the exterior. Small touches that make big differences, such as the chromed-out convertible rack, put this ’72 into the minority by actually finishing off areas that are often left alone by most owners. He went to the nines.

Next up for this Donk is a fully built system and some motor retouches, but other than that, you’d be safe to say the eagle has landed.