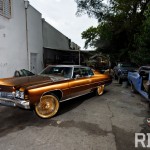 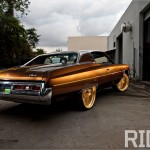 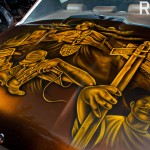 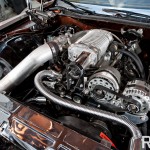 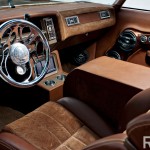 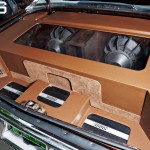 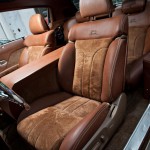 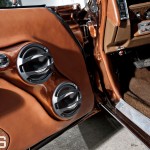 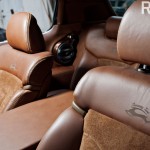 Remember Ice Cube spittin’ lines about puttin’ Dayton Wire Wheels on the mothership when “Bop Gun (One Nation)” dropped back in 1994? And all the gold-wire wheels making countless appearances in ’90s music videos like Dre and Snoop’s “Nuthin’ but a ‘G’ Thang” or Eazy-E’s “Real Muthaphuckkin Gs” from 1993? Not to mention the name Dayton came up in movies like Menace II Society. Seems as though most American-made custom whips had Dayton shoes or a less expensive gold-wire knockoff in the early ’90s, but the gold-wire trend faded into the mist at the end of that decade.

Some of us missed the 15- to 17-inch gold wires and wonder why Daytons just aren’t as prevalent as they used to be. Nowadays, it’s tough to be impressed by wheels, considering 32-inch chrome rims aren’t completely unheard of. The small gold Dayton has somewhat spiritually passed the torch to the big chrome Forgiato. Today we see Forgis just about everywhere in the custom American whip world, and we hear it in new hip-hop tracks like “Okay with Me” by Gucci Mane, or in Young Jeezy’s “Sittin Low.” Late last year, however, and early 2013 foreshadowed a new decade of gold wire wheels being hot, with modern-day style. Like the rap artists of old now being respected as OGs, so are Dayton wheels, and this House of Kolor Shimrin Brown-coated Donk shows it by wearing the biggest gold wire Dayton shoes ever made.

But you can’t rep OG status without the power and street cred to back it up. The crew at I-95 Motorsports of Pembroke Park, Florida, hooked it up with a tremendous LS2 supercharged engine and 480LE transmission, so this thing is undoubtedly fast. It’s a 1972 Imp with a 2013 mentality. The interior is entirely up to date with power seats from a new Infiniti, power windows and digital gauges in the dash—and what isn’t replaced with fiberglass is wrapped in King Ranch leather.

Every part of this car brings us back to the summers of the early ’90s, but it doesn’t get even remotely close to being out of style. Peep the graphics on the trunk and you’ll see images painted by an artist known as Y-Not, depicting four homeboys just hangin’ out on their street.

Many Donk owners classify their whips as either daily drivers or show cars. This one, though, doesn’t fall into either of those categories. The owner of this whip takes it out on nice days just to enjoy a nice cruise—like the boss that it is.