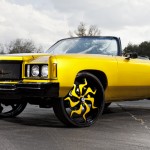 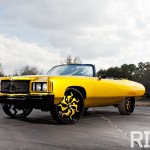 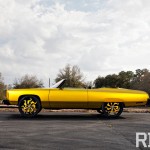 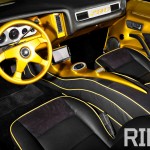 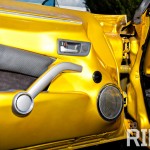 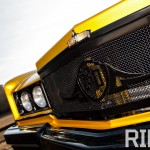 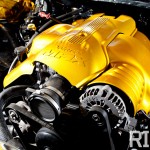 NBA All-Star Zach “Z-Bo” Randolph doesn’t need to prove anything in the Donk game, as he’s made it painfully obvious he’s got the throne held down. When you peeped Z-Bo’s rides in 2011’s Donk, Box & Bubble, we showed you his fleet of Donks, and if you looked closely, you noticed a couple tucked away in the shadows—one of which was this ’74 Caprice.

When you own as many rides as Z-Bo, it’s hard to even keep up with where they’re all located, let alone the manner in which to customize each—so occasionally Z-Bo puts Brian White of Big Wheels Customs in the driver’s seat. “We were running out of colors we could paint his cars,” explains Brian. “So I sent him this color and just kinda told him that’s what we were going with.” The color, Matrix “Devil’s Gold,” is a custom mix with an Armada Silver base and Devil’s Gold overlay that creates a hue virtually never seen on old-schools. And going completely against the grain, all the chrome was stripped and powder-coated black, including the bumpers, trim and all emblems. For the shoes, Z-Bo was less particular about the style and more so about the diameter. “He’s a 26s man; he’ll never go bigger again,” says Brian. “He had a bad experience with 28s on an Escalade.” Z-Bo opted for the new 26-inch Asanti VF603s and some body-colored Wilwood six-piston brakes to ensure this vibrant ’vert comes to a controlled halt. For the guts, Z-Bo wanted to keep it as OG as possible while pledging allegiance to the exterior. “Zach requested no fiberglass,” explains Brian. “He wanted to keep it original, so we didn’t go all-out like a lot of his other Donks.” There’s still some fiberglass, but in general, this Donk uses leather instead.

The most notable diversification on this Donk compared to Z-Bo’s others is the updated drivetrain, since he’s grown a bit tired of what comes along with carbureted old-schools. “He wanted to get away from the fuel smell and warming it up,” says Brian. “He hates getting out of the car smelling like exhaust.” To combat the problem, the crew at Big Wheels swapped the motor for a new-school, fuel-injected 6.2-liter Vortec mated with a 4L80E transmission. “It’s definitely his fastest Donk—he loves it,” exclaims Brian. “He’s thinking about swapping the motors out of all his Donks now!”