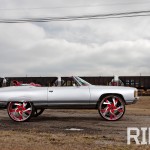 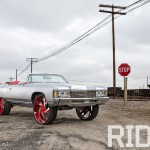 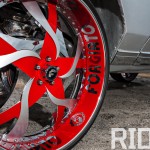 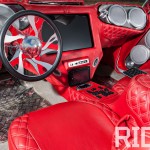 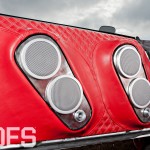 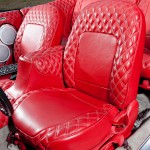 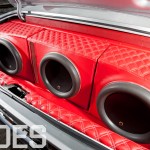 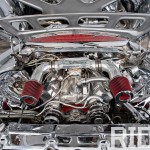 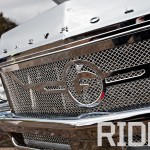 Any test or assessment yields favorable results when the test taker is properly prepared. When constructing an upper-echelon Donk, the same principles apply, as there’s a vast catalog of completed rides to examine. In this case, the owner of the silver ’71, who simply goes by “E,” saw last year’s Forgiato Fest as his first exam, and with the help of his cousin “Duck” and Kent from Kent’s Automotive, a study guide was outlined.

“We studied a bunch of magazine articles and looked at hundreds of cars on the Internet,” says E. “We were looking at what they did, good and bad, trying to capitalize on their mistakes.” In regard to the aforementioned mistakes, E clarifies that people have over-customized their rides, resulting in a cluttered visual. “Some people went too far with too many TVs and too many speakers,” explains E. “They didn’t clean the car up from top to bottom.”

The overhaul took place at Kent’s Automotive in Waycross, Georgia, South Georgia’s mecca for custom Donks. The main idea was to flood the car with a sea of chrome but to integrate it tastefully. “We decided to go chrome crazy,” proclaims E. “Kent even wanted chrome panels on the interior, but I thought that might be too much.” Chroming parts like the nose and suspension components are fairly standard operating procedure, but to achieve the unthinkable—chroming the firewall—Kent had to take drastic measures. “We literally snapped the car in half to chrome the firewall,” E says. “Most people just put a chrome plate there or paint it, but we actually chromed it.”

With such an awe-inspiring engine bay, only a prime power plant could be crammed under the hood. “People do 454s and maybe 572s, but you never see a 632,” explains E. “We said we were gonna put the biggest motor you can fit in a Donk, and we did it.” For the interior, imported Italian leather blessed the seats, door panels and dash, stitched in a luxurious diamond pattern with a twist. “We saw that Maybach truck [concept], and it had the diamond stitching that goes all the way around the seat,” says E. “Most of the cars have the diamond stitching just in the middle.”

The final features added were the shoes, a set of 30-inch Forgiato Mistos. “At first we were gonna do 32s, but we didn’t like that look,” says E. “The 32s kind of stick out, and we wanted to have the skirts on there, so we went with 30s.” Once the car was mounted up, it was ready for the big show: Forgiato Fest in Miami. “They say Miami is the home of Donks,” says E. “We’re from a small city, so we wanted to go to the home of Donks and represent—that was a real big deal for us.”

E’s silver bullet took home top honors in the old-school category, making a big statement and garnering respect, as well as disdain for the small-town, underdog ride. “My Donk is number one; I don’t think anybody has a better Donk than mine,” proclaims E. “Anybody who thinks theirs is better, I can point things out and show them why mine is better.”