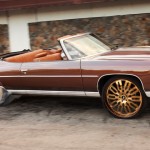 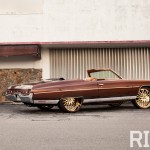 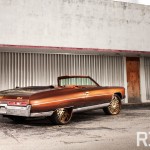 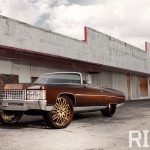 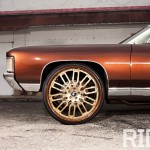 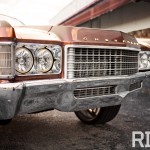 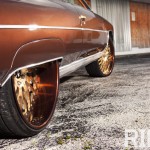 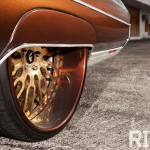 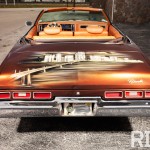 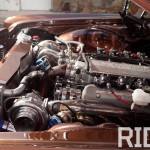 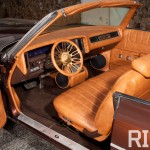 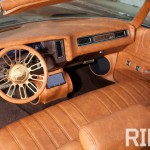 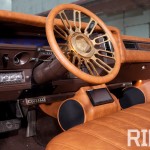 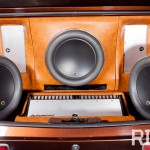 Brown is hardly considered a dignified hue, as it’s usually synonymous with mud, chocolate and, well, to be crass, shit. But when applied properly to an automotive canvas, a root beer shade can not only be bold, but beautiful, especially when accompanied by glinting gold accents and beastly horsepower.

Miami native Cash purchased this brunette bombshell in January 2012, previously coated in the chocolate flavor by another owner but with little else complete. As with any true Dade County Donk rider, Cash’s ambitions for the coffee-colored Caprice were to stay on par with his city’s standards while bending a few rules at the same time. “Around here you get kind of used to seeing the same thing,” explains Cash. “I just wanted to make it different, and that’s why I did the gold.” With a keen artistic eye, Cash noticed the paint boasted a subtle touch of color that would ultimately pair up with the gold quite nicely. “The paint has a mica sunburst pearl in it, and I knew it would go well with the gold,” explains Cash. But when selecting which items should be plated, Cash opted not to go overboard, plating only the gold faces on his Forgiatos and subtle accents, such as the headlight housings and factory emblems.

Even if Cash left the factory motor bone stock, his ’vert would still be heralded as one of the boulevard’s finest, but what truly sets this captivating Caprice apart is its profound powertrain. Under the hood, Cash opted for an extremely powerful yet reliable upgrade. “Originally, I was gonna go with a Pro Charged 572 big block,” says Cash. “But I decided to do the twin-turbo LSX instead.” Cash implored some of South Florida’s finest to take him to the promised land with Oscar at Precision Racing Development building up the engine and Flaco at House of Power installing, tuning and assembling the drivetrain and its complicated components. To complement the harmonious tones of the twin-turboed LSX, Cash enlisted Infamous Customs to install a sweet sound system featuring Rockford Fosgate and JL Audio equipment.

Since completion, the results and reactions have actually exceeded Cash’s expectations, a feat hardly accomplished in Miami. “When I first did it, I wasn’t expecting it to be the talk of the town,” says Cash. “But when it was finally done, it came out way better than I thought.” He continues, “And when somebody has something slick to say about my car, I tell them, ‘The gold is for the honeys and the motor is for the money—we can race whenever you want!’