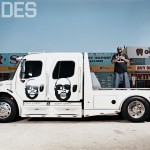 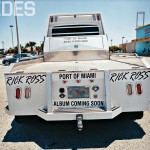 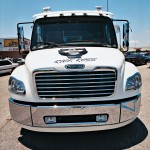 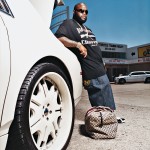 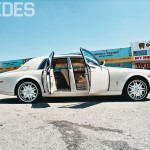 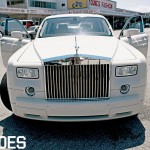      Few folks would compare the value of a Rolls to that of a Caprice—unless of course you live below the Mason-Dixon. Miami-bred rapper Rick Ross was likely to side heavy with the Chevy simply because a Rolls-Royce was but a dream, even if he hustled everyday. And even now, as both sit in his garage, the Slip-N-Slide/Def Jam Recordings signee is just as much on the fence on that subject. Guess that’s the luxury of having a blazing street single like “Hustlin’” bring more fire to Miami than Shaq and D. Wade (and that’s before the Jay-Z and Young Jeezy remix). But approach his whip slowly when you see him ridin’, dirty. ‘Cause he might have heat in that seat.

RIDES: As a youngster coming up in South Florida what were some of your early car memories?
RICK ROSS: My first memory of cars was them Cadillac Fleetwood Broughams in Miami in the early ‘80s, when I was a kid riding with my mom. I just remember her telling me, “Look at them drug dealers riding in them expensive cars.” And I was just sitting in the backseat thinking about how bad I wanted one. That’s real.

Did your mind change with the times or did you continue to fantasize about slamming Cadillac doors once you came of age?
As I got older, I knew that if I was gonna collect an old-school it was gonna be a Chevy. I got a ’73 Caprice Classic convertible. We gonna have to do a cover shoot for that because I got about a hundred grand tied up in that car.

It’s kind of crazy to peep how enthusi- astic you are about your ’73 Chevy before even mentioning that clean Rolls-Royce Phantom you got. In MIA, it’s like the roles of the cars are reversed.
Exactly. The youngsters and the teenagers around here connect with the Chevy before the Phantom. They love the way the Phantom looks and all that, but it don’t take they breath away like the Chevy do. It’s just something about Miami and them Donks.

Being that you can’t go wrong either way, how do you decide which set of keys to grab when its time to mash out?
The double R is for when I done busted one of my nice checks. I’ll pull out the Phantom and ride hard and smoke good green in it. But when I’m feeling like I’m hustlin’, or when I’m feeling bad about something, I’ll pull out that ‘vert, put about $80 worth of gas in it and get in the streets. I got about a $20,000 music system in there and them four 15s in the back are gonna wake up anybody. You can stay on the 15th floor but when I pull up under that muthafucka beating, you gonna know that’s Ross!

Is it safe to assume that you don’t have a JVC that vibrates the concrete in your Rolls?
Naw. I be in my R&B zone when I’m riding in the Phantom because that’s the prestigious whip right there. I don’t even like getting head in that. Girls be talking about how they wanna get loose in it and I’m like, “Hold shit up and put on your seat belt. And don’t even allow yourself to get too wet on that leather cause this shit cost a lot. Just sit back, ride and listen to the music and it’s gonna be alright.”

Yeah, it’s much more cost-efficient to wait until you get to the Chevy before sending the steering wheel high. Those cars are at least 30 years old right?
1976 was the last year that they made them Donks, as we call them in Miami. We Donk riders down here, and the ’73 convertible Caprice Classic is the best year, hands down. It’s by far the most beautiful Chevy they ever made. In Dade County a Donk is equivalent to a S500 Mercedes.

That’s saying a lot about how unique car culture is in Miami. Why do you think that is?
What I think made old- schools so popular was that nobody else wanted the cars at first so somebody said, “Let’s take the old shit nobody want and make that shit look good.” And that’s what I think really happened, because back then people were riding Novas, Monte Carlos, Grand Nationals, anything that was a throwback. Now that shit is like vintage.

True. Well that explains where you all stand when it comes down to the old and the new whips, which makes sense, but how the hell do you justify the Rick Ross Freightliner?
That’s a sports edition. It’s like a diesel coupe [laughs]. I know it’s funny but it’s really a diesel coupe, and I don’t like to tell peo- ple exactly what it is because these rich dudes out here who read your magazine will have 40 of them shits on the road in two weeks.

Please believe orders are still gonna go in regardless! Although it is tech- nically a commercial vehicle your joint is built for comfort.
Most definitely. You push buttons and it changes gears, the seats go back and fold down and it got three TVs. Plus, you can tow a house if you need to.

Hell, you never know when that fea- ture may come in handy. The one car we’ve yet to mention is the infamous 745Li white-on-white BMW that you mention in “Hustlin’”. Do you still have it?
You know I still got the 745Li, white on white. That’s my theme. That’s my baby right there and I’ll never get rid of her. I’ll get rid of anything other than the Chevy and the white Bimmer. I really got money in the streets with that car. That’s what I was riding when my career really took off.

With that being the one car that everyone will always associate with you, I’m sure it’s damn near impossi- ble to be low-key in it.
What people don’t be realizing is that I’m still the same street dude that’s paranoid holding on to that big pistol for anybody riding up next to me. With that car it’s like suicide, because I’d been done shot some inno- cent people who just want autographs. They be cutting across the whole expressway about to kill everybody just to pull up next to you, and when they get next to you they see you got the big .45 pointing at ‘em and I’m like, “Damn baby, you need to come to a show for all that ‘cause I’m paranoid.”

You’ll need more than a pardon from President Carter to get you out of a bind like that, so be easy man. By the way, how is your relationship with Jigga?
That’s my big homie. I’m gonna make sure Jay-Z go buy a Donk. Make sure you print that. He gonna buy one down here and leave it at my house. I’m gonna talk to him when I get back to New York so I can let him know that the next time he on the beach, Beyoncé can roll in it with the top down.

FROM JULY/AUGUST 2006 ISSUE OF RIDES MAGAZINE