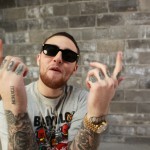 What’s special about the driving-music experience?
That’s how I test all music. That’s the best, best, best way to listen to music. You’re surrounded by speakers and your mind is set to listen to and enjoy music.

What’s your favorite whip to blast music from?
When I first started getting money, I had this [Honda] Civic…this old-ass, used Civic. When I came off my first tour, I put all these speakers in it, so nostalgic-wise, that’s my favorite of all time because I felt like a boss.

Are you the type of dude who tricks out a car with a system or are you cool with whatever comes stock?
You have to have a good system to listen to everything, clearly. I hate when there’s too much bass in a system. When I’m in the whip and there’s way too much [subwoofer], and I’m trying to listen to Erykah Badu…it doesn’t work out very well.

If someone pulls up to Mac Miller at a red light, what record would they be surprised to hear you playing?
Probably Earth, Wind & Fire, “September.” That’s a great sunny-day, driving-around song.

Here are a couple scenarios: You’re riding out with your bride on your wedding day. What song would you be knocking?
Leaving my wedding, I’m going to play UGK/OutKast, “International Player’s Anthem.”

What about in a wide-open lane on the highway?
Right now, I’m bumping ScHoolboy Q, “Collard Greens,” because Q is ugly [laughs]. Nah, his album is about to be incredible, and that song is dope.

You get pulled over by the cops for speeding. What song do you want them to hear you blaring?
Anything off [Kanye West’s new album] Yeezus.

Speaking of Kanye, June 18 was such a big day for hip-hop with yourself, Kanye and J. Cole all releasing solid albums. How do you think the date will go down in history?
It’s just good to be a part of history. Nobody really cared who came in first, second or third [in album sales]. It was kind of like we all won.