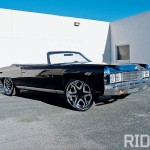 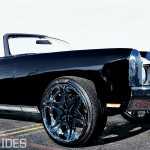 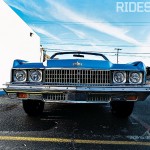 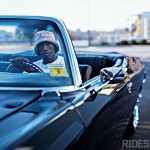 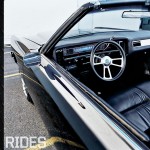 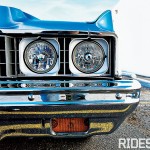 Here’s the MTV Cribs segment of Josh Howard showing off his Donk and Box Chevy on TV! (If the embedded video doesn’t work, please click here to watch it!)

Josh Howard’s midnight-black ‘73 Caprice Classic is flagrant. Like Mavericks owner Marc Cuban’s courtside manners, the reserved Dallas forward clotheslines fellow pedal pushers when he rolls on 22s through the streets of D-town, a 350 small block purring under the hood. “I’m real low-key on the court, but once I get out there, I’m giving it my all,” says the third-year pro, who has upped his production to 15.1 points per game this season. “That’s how I feel about my car. When I get it out on the highway, it can go with any car out there.” Howard has just started his old-school collection (which includes an ’89 Box Chevy), but judging from his rookie sled, his collection will be as timeless as ESPN Classic.

RIDES: I know Mark Cuban broke you off a piece of his billion-dollar bankroll. Why’d you reach for the classic sled instead of something lavishly foreign?
JOSH HOWARD: This is my way of being different. I didn’t want to be like every other player in the league with their Benzs or BMWs. When you pull into the parking garage for practice, you see Escalades and all of the other typical rides. But with me being from North Carolina, which is the country, I chose to go this route and follow along with the trend there. Where I’m from, everybody has old-schools.

And shotguns. We’re not talking about passenger seats either. Why the ’73 Caprice, in particular?
Actually this is not my first old-school car. I had a blue ’83 Box Chevy with a white top that was my baby, but it was stolen as soon as I moved to Dallas.

Damn. Nothing says welcome like grand theft auto. So what happened?
Well, after it was stolen I got the Caprice, which I’m really happy with. This is my favorite car. I get so many compliments when I ride in it. People are always offering to buy it. But I can’t part with it.

Not voluntarily anyway. So what modifications did you make to the Caprice?
I haven’t made any modifications. Everything is original. The speakers were in there before I got it. Last year it had a red paint job with spinners, so that’s the only change I’ve made to it recently. As for the performance, I plan on getting a 355 [engine] in there. Right now, there’s a 350 small block in it, so it can run with just about anything on the road.

Ever get a case of heavy foot while ridin’?
I’ve taken it to 100mph plenty of times. It can really move.

How often do you actually drive it?
I pull it out when it’s a nice day and I can ride in it with the top down and just enjoy myself. Right now, I drive it the most during the summer and half of the time, they don’t know it’s me in it. The car gets all of the attention.

Obviously, since your whip was jacked upon arrival, Dallas has a classic car scene. How does it compare to back home?
Back home, I saw a lot of cats driving old-school cars when I was growing up, so it’s more prevalent there. But Dallas is pretty much known for old-schools. On a Sunday night, you can see Monte Carlos, Oldsmobiles and other old-schools out.

Now, the Caprice isn’t the only vintage ride in your collection, correct?
No, I also have a pinkish-purple ’89 Box Chevy that I’m not finished with just yet. I bought it for only $1500. It had a lot of storm dents in it. I went ahead and put a TV screen in the front, three 13-inch speakers in the back and a peanut butter interior. I had it jacked up like a Tonka toy and put 24s on it. I also have pink plates behind the rims, so when I’m rollin’, you can see the pink to match the paint.

Have you been able to come out and play with your Tonka toy yet?
I haven’t been able to ride in it yet. It’s not finished. But my enjoyment comes from taking cars like this and rebuilding them. I appreciate the time and effort that it takes.

That gives you a grand total of two old school sleds. Any plans to add to the fleet?
Well my very first car was an ‘80 Buick Regal, so if I come across one of those, I’ll get it. There’s also an old Cadillac that I saw in this lot near my house that has no engine and is missing a door. I haven’t been able to stop in and look at it yet. As for the fleet, I’m probably going to add more classic cars to it. Even when I make more money and can afford the expensive cars, I’m still going to stick to the old-schools because I have fun with ‘em.