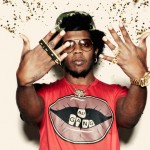 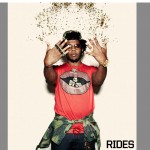 Your new video for “All Gold Everything” has a ’71 Caprice that RIDES featured in the Dec/Jan 2011 issue.
That’s crazy! That’s my boy. We pulled up in this bitch together, and he’s in the video! He’s the one drivin’ the car. That’s crazy. It’s really cool that you got my boy in there. Really dope, man! I’ma tweet it.

So that was your boy’s car—have you copped anything yet?
Not yet.

Is there certain music you listen to when you’re driving or just rollin’ in a whip?
I like music with no words, like Slaptrap. There’s this guy named XXYYXX—he’s really dope. I like music that just sonically sounds good, with really good vibes. There are no words, or rarely any words. You know, I like to listen to music like that when I’m just chillin’.

We’ll have to check them out. When you aren’t cruisin’, who’s hot with you?
I don’t really want to call any names, but I did get Kendrick Lamar’s album. And Adele’s “Skyfall” is really dope—that song she does for the 007 movie—super dope. I love Adele. And I listen to myself. I just work so hard in the studio that it kind of makes you listen to yourself, because, you know, [other] artists are your biggest critics. That’s why I listen to myself, to be honest with you. But I mean, there are some people doin’ stuff. But I’m just not big on callin’ names, man. Like, I rock with people, and the people I rock with, they know I rock with ’em. They know.

What about the classics?
Yeah, of course, man. I’m a fan of hip-hop.

Any examples?
You name it, I listen to it, to be honest with you. You know how oldies are, man: It’s never one good one, it’s a whole bunch. You know, just put on the station and it’s like, “That’s my jam.”

Does that spark ideas and inspiration for new rhymes?
Yes, it does, because it gives you the chance to think. It’s almost like you’re hearing an instrumental. But it’s not. It just opens the mind like, “Okay, let me say this, let me say that.” And then you can take what you’ve said there and put it on something that you really want to.

So on your mixtape, Don’t Be S.A.F.E., what’s the hottest jam in your mind?
All of ’em [laughs]. I like “Females Welcomed,” and number nine, “Giving No Fucks.” I like both of those, but I really love the whole project, you know? Each one has a special meaning. But I guess for me, personally, if it wasn’t my tape and I was like, “Oh, let me pick two songs from this guy’s tape to listen to,” I’d grab number two and number nine.

What are your future plans?
Man, hopefully when I get my ride, I can be in RIDES magazine.