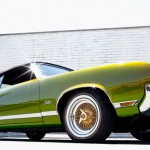 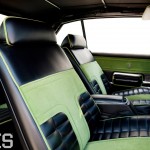 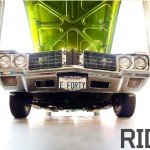 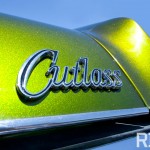 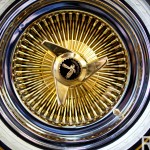 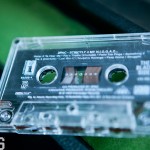 Legendary rapper and entrepreneur Earl “E-40” Stevens bought his drop-top 1970 Oldsmobile Cutlass in 1988, the same year that he dropped his first record (M.V.P.’s The King’s Men). Twenty albums deep (17 solo and three with his group, The Click) and several million records sold later, E-40 is still making hits, and he still has his prized old-school Cutlass in the fleet.

The Cutlass was 40’s second old-school whip. Before he copped the Oldsmobile, he drove a burgundy-candy-painted 1967 Mercury Cougar. When he purchased the Cutlass from his boy Drop Top Will, it was baby blue, but he quickly flipped the paint, interior, top and sounds to his liking. “I painted it coke white, changed the interior to white and brown, and had a convertible dookie-brown top,” says 40. “I also put in some Rockford Fosgate speakers, Zeus amps and a gold Zap board.” He completed the look with a personalized plate that reads “E FORTY,” which he still has to this day.

Anyone who’s listened to his music over the years has no doubt heard 40 mention his favorite whip, but the ’70 Cutty didn’t make its visual debut until 2001, when it was featured on the cover of The Click’s Money and Muscle album. By that time, he’d taken it to his guy Manual in his hometown of Vallejo, California, to get it pained “booger green.” Explains 40, “Manual paints the best. He been painting since I was a little kid.”

Over the years, 40 has kept his Olds road-ready, rebuilding the transmission and the highly carbureted dual exhaust. He’s also updated the aesthetics, adding a digital dash, power windows and a black canvas top. But don’t expect the veteran to fill up the wheel well on his prized possession. “I’m not mad at newer things that go down, but I like to keep mine real O.G. and classic with the Zeniths and the Vogues, you smell me?” he says. “Fifteens and it looks clean like that. That’s how we rode in the ’80s, so I might as well keep it O.G.”

E-40 kept it O.G. throughout, with his cousin B-Legit and fellow Bay Area rap legend Richie Rich on “Cutlass,” off of his latest release, Block Brochure: Welcome to the Soil 1. The song, which is an ode to the old-school classic, was produced by longtime 40 collaborators and Mob Music inventors Mike Mosley and Sam Bostic, and it’s an updated version of a sound that longtime E-40 fans have been clamoring for.

After redoing the interior, the top and the custom paint twice—not to mention the work under the hood—40 estimates he’s spent between $35,000 and $40,000 on his ride, but it’s no show car. “I’m waiting on Richie Rich and B-Legit to get theirs done,” says 40. “Hopefully we’ll catch the end of the summer, and you’ll see three O.G. rap niggas sliding out.”