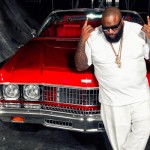 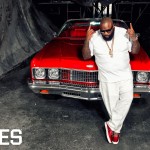 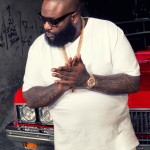 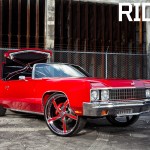 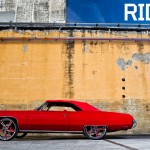 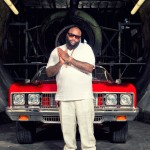 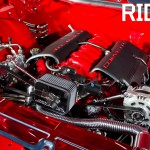 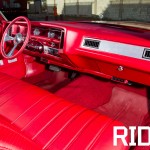 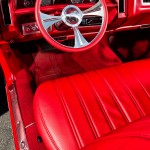 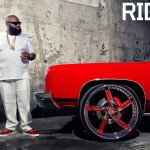 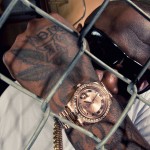 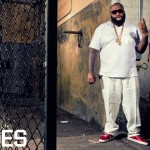 Rick Ross, now referred to as Ricky Rozay by himself and anyone associated, is a man who commands such attention that a single grunt or ad-lib makes his presence known in a crowd or on a track. His stature is unmistakable: 300 pounds of tatted flesh draped in diamonds, his face masked in large, dark sunglasses. Not only has he made an insurmountable contribution to hip-hop, but he also illuminated a corner of the whip game seldom seen prior to 2006. In Ross’s first video release, “Hustlin’,” he whipped a cocaine-white 7 Series, but also—and most notably—flaunted a candy Donk on 26s for the first time on national television. Fast-forward six years and the Bawse’s popularity has risen considerably despite a multitude of hurdles, even one that almost took him out of the game completely. Basking in the success of his latest mixtape, Rich Forever, and slowly cooking up his next studio album, God Forgives, I Don’t, Rozay has managed to construct a game-over-status Donk that not even his platinum records could rival.

RIDES: When did your fascination with Donks begin? What was the first Donk you remember growing up?

RICK ROSS: It had to be the mid ’80s. Donks have always been a fixture in Miami. Donks, old-school Chevys, Caddy Broughams, Fleetwoods, 30 and lows, Vogue tires—that’s always been Miami.

Outside of Trick Daddy, you were really the first person to put a custom Donk in a video, especially on a national stage. Were you purposely trying to shed light on that or did it just happen?

That’s our culture, that’s what we love, ya know what I’m saying? Those are just the whips we always gravitated toward putting together. That’s what I wanted to do; it was only right. Get you a ’vert, make sure that paint wet, make sure that motor right, and do it for the streets.

What makes your ’73 so special?

Man, it’s basically a 2012 1973 Convertible Caprice. Every screw, every wire, every brake line is brand-new. The body is the same body you would have gotten in 1973. It took a long time just to get the results we wanted, and I’m extremely happy with it.

What kind of input did you have on the build?

I just let my homie Isaac [at GSE Customs] know how I wanted it. Isaac’s my partner; we’ve been going back since I was a young boy, gettin’ my first set of 16-inch Vogue tires, puttin’ my first subwoofers in the back of my Cutlass—he’s been doing cars for me forever. I used to see his cars, his old-schools, his Land Cruisers, and I knew he knew what to do with ’em. So every time I got my li’l change up, that’s who I went to see. So we been puttin’ this together for a long time.

What’s your favorite part of the ’vert?

Of course the Z06 Corvette motor; it snatches like a drag racer, but I could drive it from here to New York City without a problem. And I like the automatic push-button transmission, the keyless entry and start.

So how much money do you have in it? Just by looking at it, I can see six figures at least.

Naaaw, I can’t do it. Let’s just say if you brought half a million, cash, I wouldn’t even take it. It’s that serious.

Damn. So we know you got other whips, but how many?

I’m not even sure at this point. I really couldn’t say. We got a warehouse full of ’em.

We know you have the Maybachs, the Dropheads and the like. Which is your favorite? What’s the difference between the old-schools and the new?

Man, you can get that [new] shit off the lot, I ain’t even trippin’ off that. But either the black ’57 Bel Air or the ’73 ’vert. Those cars have more character than a Drophead. We do the new shit all the time; you can just go up the street and buy that. But them old-schools, the shit you gotta go through to get what you want really makes the car mean something to you. Whether it’s a ’69 Camaro or a Trans Am, a Grand National or a Shelby Mustang, whatever you had to go through to put that car together makes it mean that much more to you. It makes it priceless.

How does your ’vert compare to others out there?

It ain’t even like that; people have cars for certain reasons. It’s like when I see a certain Chevy sittin’ on the corner, just the way that muthafucka could be squattin’, or the antenna sittin’ in the back, the way the bumpers look—there are different reasons I like different cars. I may pull up on the block and see a ragtop on some candy shit, or it could be just original, and I’ll love it. I think every whip has its own vibe. But as far as really puttin’ shit into a car, there isn’t another car that can compare to mine.

Rich Forever is in heavy rotation. Will that momentum transition over into God Forgives?
I just did that [mixtape] for my supporters, everybody who’s been holdin’ me down and been supporting me since day one. It already has 10 million downloads worldwide, so now I’m just excited to put out this classic album, and I believe everybody is gonna be happy with it.

The actual automobile brand Maybach has now folded. What does that do for your record label with the same name? Does it help or hurt? Have you thought about that?

Not really. Rich ni**as don’t really even think about shit like that. We just think about the next moves. But as far as the whips, everybody who love ’em got ’em already, so that don’t even matter. I love what they brought to the car game, but that’s it.

Anything else on the horizon with your whip game?

Shout out to GSE Customs—we’ll be introducing our own custom wheel line coming soon. And hit up your boy on Twitter, @RickyRozay!